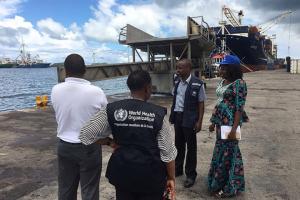 This year plague came early to Madagascar and spread quickly. When it began to move out from the areas where it traditionally occurs, people became increasingly alarmed – both within the island nation and in neighbouring territories and countries.

From August to late October 2017, more than 1800 suspected, probable or confirmed plague cases were reported, resulting in 127 deaths. This outbreak is unusually severe, and there are still five more months to go before the end of the plague season.

WHO has acted quickly, releasing funds and sending experts and supplies to Madagascar, while supporting neighbouring countries to reduce the risk of regional spread.

WHO provides 1.2 million antibiotics to fight plague in Madagascar

Being ready to act, preventing panic

Plague is one of the oldest – and most feared – of all diseases. Historically, plague has been responsible for widespread pandemics with high mortality. It was known as the "Black Death" during the fourteenth century, causing more than 50 million deaths in Europe.

Nowadays, plague is easily prevented and treated with antibiotics if detected early enough, and infection can be prevented through the use of standard precautions.

“An outbreak of plague no longer unfolds in the manner portrayed by our history books,” said Dr Sylvie Briand, Director of WHO’s Infectious Hazard Management Department. “Plague is an old disease, but the challenges it poses today are contemporary and fundamentally different from what we had even 40 years ago.”

Despite the relative ease of treatment, plague’s association with the Black Death weighs heavily on the popular conscience – and is regularly cited in media reports and tabloid headlines about outbreaks.

So it is important to strike a balance between encouraging countries in the region to be ready to act in case of an outbreak, while avoiding panic that could result in unnecessary or counterproductive measures such as trade restrictions or travel bans on affected countries.

WHO moved quickly to support the Government of Madagascar to respond to the outbreak, while at the same time working with nearby countries and territories.

Neighbouring Comoros, Mauritius, Mozambique, Reunion and Mayotte, Seychelles, South Africa, and the United Republic of Tanzania were prioritized for increased plague preparedness and surveillance. WHO has also helped Ethiopia and Kenya to raise preparedness levels because of their direct airline connections with Madagascar.

When WHO began to increase support for the Malagasy Government’s response to the outbreak, one of the first places they went was the capital’s international airport. A WHO team advised on putting in place more robust and visible public health measures.

The strengthened exit screening system provides information about plague to all travellers, screens passengers through temperature checks and medical questionnaires, and includes procedures to isolate and treat symptomatic passengers.

“The exit screening process tracks passengers from the moment they enter the airport until they board a flight. We also provided information to airline companies and spoke to airport medical personnel. We explained the disease, the risks, and how they can be prepared,” said Dr Briand.

For the nine priority regional countries and territories, the first step was to identify weak points in preparedness and operational readiness. WHO worked with national health authorities to complete a plague preparedness checklist to assess their readiness, and to identify concrete actions to bridge gaps.

The checklist assesses national coordination mechanisms, and logistical, epidemiological, and laboratory surveillance capabilities. It verifies that Rapid Response Teams are ready to deploy, that risk communication and community engagement strategies are prepared, and that preparedness measures are in place at points of entry.

If gaps are identified, immediate steps are taken to address them. In Seychelles, WHO supported laboratory testing of suspected cases, deployed experts and medical supplies, and provided guidance for the tracing and treatment of contacts of people suspected to be infected.

In Mauritius, in addition to completing the checklist, WHO helped to address concerns about the high number of direct flights between Madagascar and Mauritius by supporting the Health Minister to communicate the measures being taken to strengthen plague preparedness at all levels.

WHO logistics teams also prepositioned equipment and supplies – including personal protective equipment (PPE), antibiotics, and other equipment required to safely identify plague cases – in Comoros, Mauritius, Mozambique, and the United Republic of Tanzania.

“We’ve accomplished a great deal in a short time, and helped to strengthen overall regional health security,” said Dr Ibrahima-Soce Fall, WHO Regional Emergencies Director for the WHO African Region.

“But to ensure longer-term sustainability, we have to provide continuing support for Madagascar’s health system to better anticipate, detect, and respond to future plague outbreaks. Supporting these efforts improves health security for everyone.”

Through its Health Emergencies programme, financial support for WHO’s response to the plague outbreak in Madagascar has been provided by the WHO Contingency Fund for Emergencies (CFE) and the governments of Italy and Norway.

The International Federation of the Red Cross and Red Crescent Societies, as well as the Malagasy National Society, the Institute Pasteur, Médecins Sans Frontières (MSF), UNICEF, the United States Centers for Disease Control and Prevention (CDC), Santé publique France, the Global Outbreak Alert and Response Network (GOARN) and other partners are actively supporting the government and health authorities in Madagascar.

WHO has provided technical and operational support in a wide range of areas from coordination and planning to surveillance, case management, community engagement, logistics, and more.