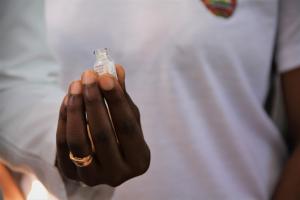 Kinshasa – More than 14 African countries have reported cholera cases since January 2022. In the Democratic Republic of the Congo, this acute diarrhoeal disease is endemic in several provinces. Since the beginning of the year, more than 12 300 suspected cases have been reported, including 222 deaths, in 17 of the country's 26 provinces. Dr Aaron Aruna, Director of Epidemiological Surveillance at the Ministry of Public Health, Hygiene and Prevention, discusses the challenges and the efforts being made to tackle cholera.

Why is it so difficult to control a cholera outbreak?

Controlling a cholera outbreak is difficult because it takes huge amounts of resources to launch a multisectoral response and conduct meaningful epidemiological research. Outbreaks do not all have the same dynamic, nor the same profile. Each outbreak requires targeted measures. Take for instance the epidemic in Kalemie, in Tanganyika Province: most of the cases there are suspected cases. We need laboratories that can confirm cases, especially when an outbreak occurs. Test results can provide information on an outbreak of cases and let us know when it’s time to trigger an appropriate response to minimize or eliminate cases early during the rainy season before the outbreak spreads. Unfortunately, it is only when we start recording deaths that a response is triggered; we do not see the epidemic coming. A late reaction lets the epidemic take hold. It is better to act when there are still just a few cases to give ourselves every chance of halting it.

What role does vaccination play in the cholera response?

The Democratic Republic of the Congo has been using vaccines for at least 10 years, but we deploy the vaccine only under certain conditions. First, vaccination is required when there is massive population movement from a high-risk area to a cholera-free area. Second, when the epidemic is spreading, we can organize preventive vaccination in areas that are not yet affected. Third, vaccination campaigns should be organized during periods when there are few cases. When we conduct studies, we find that cholera persists even during periods of low infection. Vaccinating at that time would protect the population and prevent the spread of the disease.

Vaccination is effective only if carried out on a large scale. If you vaccinate only the population in an affected health area while that population is mobile, you will not have the desired result. This is especially true when, for example, an epidemic occurs in a large city like Goma. For now, with insufficient vaccines available for a country of this size, we need to target the affected health areas.

The vaccine is therefore a complementary tool to other actions that allow us to contain and eliminate cholera.

What are the other tools to fight the disease?

It starts with surveillance, case investigation, strengthening clinical care and improving sanitation and access to clean water. Communication with the population is also essential. Together, these tools make it possible to rapidly control cholera outbreaks.

The public’s attitude is very different if an epidemic occurs in an area where the disease is recurrent as compared with an area where cholera is unknown. In non-endemic areas, people tend to be more afraid and react faster. At the end of the day, health systems must be strengthened at the outbreak level.

What lessons learned from previous outbreaks do you apply today?

Today, our responses to cholera outbreaks are community-based responses. The response must be carried out within communities, at the household level. That’s where we must raise awareness of the disease and its prevention, explain what to do when there is a case, how to refer this case to treatment centres. This must be done in conjunction with the distribution of soap, water treatment products and medicines, while also working with water distribution companies to improve water quality. There are also actions to be taken around sanitation, waste management and the construction of latrines. This multisectoral approach at the household level empowers communities to control and eliminate cholera.