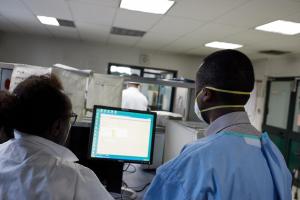 Brazzaville/Conakry – Guinea today declared the end of the Marburg virus disease outbreak having recorded no new cases over the past 42 days—two incubation periods, or the time between infection and the onset of symptoms. The virus was confirmed on 9 August, marking the first time the disease emerged in the country and in West Africa.

Only one case—the index patient who was diagnosed with the virus posthumously—was recorded and more than 170 high-risk contacts monitored for 21 days. The disease, a highly infectious virus that causes haemorrhagic fever, was detected in southern Guinea, the same region where the initial cases of the February—June Ebola 2021 outbreak as well as the 2014—2016 West Africa Ebola outbreak were detected.

“Without immediate and decisive action, highly infectious diseases like Marburg can easily get out of hand. Today we can point to the growing expertise in outbreak response in Guinea and the region that has saved lives, contained and averted a spill-over of the Marburg virus,” said Dr Matshidiso Moeti, WHO Regional Director for Africa.

While the outbreak has been declared over, flare-ups can occur. WHO continues to support Guinea in its efforts to remain vigilant, maintain surveillance and build capacity to respond quickly to a possible resurgence of the virus.

Guinea’s health authorities, WHO experts and scientists are deepening investigations into the source of the Marburg outbreak, including analysis on bats as well as undertaking serological surveys to not only help understand how the virus emerged, but also help prevent potential future outbreaks.

Marburg, which is in the same family as Ebola, is transmitted to people from fruit bats and spreads among humans through direct contact with the bodily fluids of infected people, surfaces and materials.

Although there are no vaccines or antiviral treatments approved to treat the virus, supportive care – rehydration with oral or intravenous fluids – and treatment of specific symptoms, improves survival. A range of potential treatments, including blood products, immune therapies and drug therapies, are being evaluated.

In Africa, previous outbreaks and sporadic cases have been reported in Angola, the Democratic Republic of the Congo, Kenya, South Africa and Uganda.

WHO Regional Office for Africa