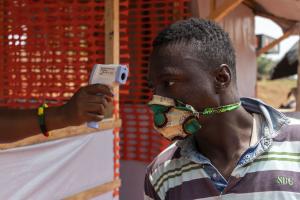 Conakry – The Ebola outbreak that erupted in Guinea in early 2021 was declared over on 19 June, just four months after the first cases were confirmed in a rural community in the south of the country. Banking on the lessons learned from the deadly 2014–2016 outbreak as well as a growing national expertise, a prompt response was mounted, helping to curb widespread infection. Minister of Health Honourable Dr Rémy Lamah explains what it took to halt the virus and the challenges met.

What lessons have been learned from the previous outbreak and how were they applied in the just-ended outbreak?

In the previous outbreak it took us more than three months to set up an effective Ebola response coordination. In the just-ended outbreak the Ministry of Health and its partners responded much faster. The outbreak was declared on 14 February, just one day after a cluster of three cases were confirmed, in accordance with the recommendations of the International Health Regulations.

This allowed us to rapidly deploy multidisciplinary teams comprising Guinean experts—with experience gained during the 2014-2016 outbreak—to quickly set up the response measures and contain the virus.

Vaccination of contacts, contacts of contacts, frontline health workers as well as using new drugs enabled us to break the chain of transmission in a much shorter time that before.

The existence of treatment centres throughout the country facilitated rapid treatment of suspected cases and patients confirmed with the virus. We had better medical expertise such as improved care, resuscitation beds, laboratory integrated in the Ebola treatment centres and a trained workforce.

The National Health Security Agency established in 2016 played a great role in bringing the outbreak under control.

What were the challenges in this outbreak and how were they overcome?

Weak involvement of the communities in the response due to denial of the existence of the disease was one of the major challenges. This led to low acceptance of our response measures and poor notification of suspected disease alerts as well as refusal to be referred to treatment centres.

We must deepen community involvement in outbreak response through devolved, primary health care systems to gain greater participation and commitment as well as strengthen dialogue with communities by being alert to the various social structures. It is also crucial to enhance community-based disease surveillance systems and involve key community actors and leaders.

Another significant challenge was resource mobilization while tackling the COVID-19 pandemic.

What needs to be done to further strengthen the response not only to a possible Ebola resurgence but to other epidemics?

We will soon hold an after-action review of this response to determine what has worked well and what needs to be improved to enable us respond even more effectively to future outbreaks.

However, field teams will continue to work for another 90 days after 19 June to support recovery and strengthen the surveillance of outbreak-potential diseases.

However, it is important that we reinforce the capacities of the national and regional epidemic alert and response teams in health emergency management and equip them appropriately.

We also need more research for better sociocultural understating that will enable us to quickly develop comprehensive response strategies (less coercive) to engage communities and taking sociocultural and anthropological factors into account in developing and implementing response measures.

We also need to mobilise more resources to strengthen our health system to meet the universal health coverage objectives through the national policy on community health care systems.