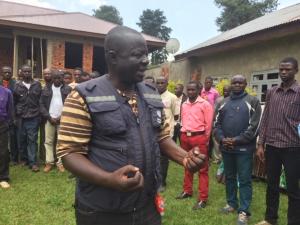 Goma, 25 February 2020 - Guinean anthropologist, David Niabalamou is so passionate about his job engaging with communities affected by Ebola that he’s learned two new languages in twelve months, earning him the affectionate nickname, David the Local, from colleagues. Having worked on the Ebola response in his native Guinea from 2014 to 2016, Niabalamou was keenly aware that language is key to earning people’s trust.

"For me, the best way to integrate into a community is through learning its language’, he says. “That’s why it was my objective. I first got to know the people, which made it easier for me to learn the language."

Working in and around Butembo to raise awareness around Ebola and how to prevent the virus, he quickly learned both Swahili and Nande, to include everyone in the community in his efforts. "Ebola is a community disease”, he says, “Without the involvement of everyone in society, all of our efforts are doomed to failure". For him, it’s crucial to be in contact with communities to listen, understand their feelings and their experiences. “Every day, I go to the field to meet the communities with whom I organize dialogues, community meetings with a view to overcoming social rejection and resistance”, says Niabalamou.

Working with a team of fifty-five and covering fifteen areas around Butembo, Niabalamou has worked to raise awareness and successfully reintegrate Ebola survivors into their communities by organizing reintegration caravans, to celebrate the return of those who have been healed and to encourage their communities to welcome them back. He’s also organized awareness days in schools, and helped with local development projects, for example rebuilding a bridge linking an underprivileged district to its main health centre, with the support of WHO.

"He did an excellent job”, says Dr Nzanzou Syalita, the district’s chief registry officer. “Without his personal involvement in raising household awareness, Ebola would have decimated our community. He encouraged the communities by giving them assurance that Ebola can be cured; he removed the veil on the treatment centres that they are places where people are left to die”.

Niabalamou is especially proud of his successful reintegration of Ebola survivors in the areas of Katya, Matanda, Vutsetse Vutsundo, despite the reluctance of the communities. "In this health area, all the response teams were rejected because the community did not believe in Ebola’, he says. "I intervened with some influential community leaders, such as the youth leader and the chief of the Nande notables, to defuse the situation"

Another big challenge is the constant threat of violence in an area where armed groups such as mai-mai are visibly present. "My determination to be constantly on the ground has not been defeated by the security challenge there”, says Niabalamou. “I managed to make friendship ties with the families which has opened doors for me all over Butembo health zone."

Niabalamou says that the instability of the region is the biggest difference between the Ebola epidemics in his native Guinea and in the DRC, and a major factor in prolonging the outbreak. "Whenever we near the end of the tunnel, attacks stop the work of the response teams," he says, adding that the influence of armed groups acting in their own interests has made it harder for community leaders to persuade their communities to take action against Ebola.

Despite the challenges, Niabalamou’s determination to be a part of local communities has paid off, earning him a second nickname, this time from the communities in which he works. “He quickly integrated into our community by respecting everyone”, explains the mayor of Vulumba, Cyprien Sivyaghendera. “We gave him the name Kambale because, in Nandi custom, the second boy from the mother’s side must have this name. We call him Kambale to tell everyone that David Niabalamou is from here”, he says.