Blandine Kazade: The nurse who saved a city in the Democratic Republic of the Congo 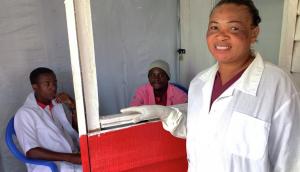 Blandine Kazade: The nurse who saved a city in the Democratic Republic of the Congo

In the Ebola epidemiological zones in the Democratic Republic of the Congo, health care workers must stay alert, vigilant and careful. An Ebola infection could find them before they realize it is circulating within a patient who just came for treatment. Of the 162 health workers infected since the start of this tenth outbreak in August 2018, 65 died; 63%, or 102 of them, were nurses.

When an undiagnosed Ebola patient walked through the gates of the Afya Himbi Health Centre in Goma, nurse Blandine Kazade was alert and cautious. Her quick reaction, as she tells it here, to notify other health authorities triggered an immediate response that stopped the transmission of the virus in a city of one million people.

They call me Nurse Blandine Kazadi.

My job here at Afya Himbi Health Centre is to attend to the sick who come for help. We get to see people with different ailments. I have worked here for a few years, and I am well known in the community.

I am the person who detected the first Ebola patient in Goma. That day turned out to be a huge surprise for all of us at the health centre. From the start, there was nothing unusual about that patient. I received him at the consultation room and asked him what brought him to the hospital. He told me he had fever, headache and vomiting.

I asked him where he is from, and he said he had travelled from Beni, an Ebola hot zone, to visit a fellow pastor in Goma.

With my gloves on, I examined him, and my alarm bells went off. I immediately suspected he could be an Ebola case. I called my colleagues and explained my suspicion.

We immediately took the patient into isolation, away from other patients.

We called the head of the hospital and explained the situation that we were in. He arrived to make the assessment and called the Ebola expert team. They arrived shortly after to pick up the patient for further testing at their specialized centre.

The results later came back as positive for Ebola.

The results jolted me. I got so scared. I asked myself, “What have I done to my family?”

Our colleagues from the [Health] Ministry and the World Health Organization came to encourage us and vaccinated all of us plus all the patients who were at the facility that day. Our families are okay, and no one who encountered the Ebola patient was infected.

But there was a section of people in the community who were not happy with what we did. They accused me of being paid to say that Ebola is in the community. They believed I was paid to lie, and they even threatened to burn down the health centre. But the [hospital] chief and government officials came to our defence. Communities must now realize that this disease exists and can’t be hidden any longer.

What saved us from getting infected is the information that we had obtained from the World Health Organization through training on Ebola. The training really prepared us to be on high alert and look out for the correct symptoms of the disease. But we also know what steps to take once you have identified a suspected case. We are always alert. We do not take anything for granted.