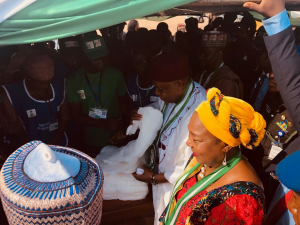 Taraba, 13 August 2019 –  With support from the Global Fund (GF), the National Malaria Elimination Program (NMEP) and the World Health Organization (WHO), Taraba and Kaduna State Governments distributed a total of over 7.3 million long-lasting insecticidal nets (LLIN) to indigenes across 39 Local Government Areas (LGA).  From 19 to 23 July 2019, over 2.1 million LLINs were distributed across all 16 LGAs of Taraba State while in Kaduna, at least 5.2 million nets were disseminated to citizenry across 23 LGAs of the state from 02-07 August 2019.

During the LLIN/Immunization Plus Days (IPD) flag off event, the Executive Governor of Taraba State, Mr Darius Ishaku described the campaign as a very significant support to Nigeria’s health care delivery system. “My administration and people of the state are indeed appreciative. Let me also renew the commitment of this government to the continuous provision of an enabling environment for health care delivery in the State,” he affirmed.

The Governor seized the opportunity to appreciate the efforts of all implementing partners stating “They are all here willingly to support, and  strengthen us in order to achieve our set targets and goals. Without them there will be a huge vacuum in our health care delivery system”.

Governor Ishaku strongly urged Health care workers at all levels to be more dedicated and committed toward achieving the successful implementation of this campaign to realize the desired objectives.
Meanwhile during the flag off in Kaduna, the Executive Governor, Mallam Nassir El Rufai who was represented by the Deputy Governor Dr Hadiza Balarabe called on indigenes to ensure they make appropriate use of the nets.

Nigeria is among the top high burden countries and one of the two epi-centres of malaria transmission across the globe. Since the year 2000, almost all high burden malaria countries have achieved significant progress in the fight against this preventable disease and this success story is incomplete without the mention of the LLINs which proves to be the most cost-effective intervention when used optimally.

In a bid to fast-track the fight against malaria, WHO Nigeria supported the respective State Governments and participated at various levels namely pre-Implementation, in-process monitoring and Lots Quality Assurance Survey (LQAS).

“WHO is committed to supporting the Nigerian Government at both the State and Federal level in the fight against Malaria,” says Dr Lynda Ozor, the WHO National Professional Officer for the Malaria Containment Project.

“This is in line with the WHO Global Malaria Programme (GMP) guided by the Global Technical Strategy for Malaria which aims at reducing malaria case incidence by at least 90% by 2030. WHO encourages partners to leverage on existing WHO structures that cut across all levels in the States including LGAs, wards and settlements during the microplanning stage to achieve quality campaigns through adequate planning to reach every ward,” she affirmed.

The LLIN distribution initiative was made possible with support from the WHO, Global Fund (GF), the National Malaria Elimination Program (NMEP), Catholic Relief Services (CRS), Society for Family Health (SHF) and the Taraba and Kaduna State Governments. 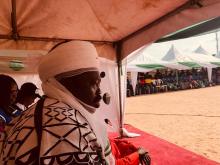