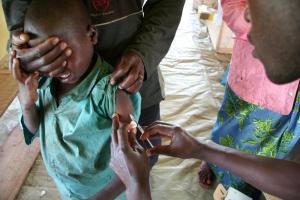 Kenneth Kabagambe knows the cost of hepatitis B all too well. So much so, that he’s dedicated his entire life to wiping it out.

He has become the most visible face of the disease in Uganda which, like many African nations, has a high prevalence rate of chronic hepatitis B. More than 6% of the population is infected.

“Uganda has superb lessons to share, and we support these important exchanges as they are helping to build evidence-based policies and promoting partnerships for more concerted action against viral hepatitis across the region,” said Dr Matshidiso Moeti, World Health Organization Regional Director for Africa.

She was speaking prior to the opening this week of the first Africa Hepatitis Summit which brings together experts from across the continent to discuss how best to tackle viral hepatitis – a disease which spreads through blood and bodily fluids and is claiming the lives of an estimated 550 people in Africa each day. Most succumb to complications of liver disease, including cirrhosis and liver cancer.

Kabagame’s journey began while he was studying at Makerere University in the Ugandan capital of Kampala back in 2009, when he lost a close friend to a long battle with the disease.

The loss had a profound impact on Kabagambe, who gathered 12 like-minded friends to fight the disease, uphold the dignity of people living with it and raise awareness around it.  And in a twist of fate that further placed the disease at the centre of his life, he, too, was diagnosed with it in 2012.

“I had to become a voice for those living with hepatitis B,” Kabagambe explains, "and due to the stigma, discrimination, isolation and the lack of public knowledge around the infection, I went public with my status to break the silence.”

“You can live a full, dignified life with Hepatitis B, but the most important thing is prevention, especially vaccination in newborns. For adults, testing, linking to care, education and treatment as needed are crucial – as there is no cure, treatment is often lifelong,” says Kabagambe, who founded Uganda’s National Organization for People Living with Hepatitis B in 2012.

With support from the Ministry of Health and the World Health Organization (WHO), his organization was registered as a non-government organization in 2012 and is now a household name in Uganda and beyond.

“Over the years, we’ve been working hard for more government support, and we’re quite proud that Uganda was one of the first African s to fund domestic action against hepatitis B,” he says.

With investments of around US$ 3 million a year, Uganda embarked on a massive, free hepatitis B screening programme in 2015, along with widespread community mobilization and awareness-raising actions. More than four million people have been screened. More than 30% of the population who are infected with hepatitis B are now aware of their status and can access comprehensive treatment services, including free medication. That’s a first in Africa and surpasses the 2020 target of 20%.

Kabagambe has clear demands and expectations of what still needs to be done.

“African nations must fund domestic efforts to prevent the spread of both hepatitis B and C. Patients are really concerned about this. They want action,” he stresses.

“We also need all African governments to swiftly start work on their own action plans at home, and we need far more action on awareness raising, as you simply cannot prevent something you know nothing about.”