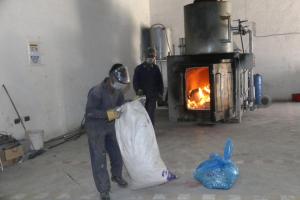 mOPV2, a WHO-prequalified vaccine with the same operational characteristics as bivalent oral polio vaccine (bOPV), is reserved for use in response to an event or outbreak of type 2 polio virus strain. It can only be released from the global stockpile of mOPV2 upon authorization from the WHO Director-General after strict approval processes are passed through the mOPV2 Advisory Group, and supplied to countries by the UNICEF Supply Division.

Following global declaration of eradication of type 2 wild polio virus in September 2015 and a synchronized global switch from trivalent oral polio vaccine (tOPV) to bOPV in May 2016,   any case or isolate of vaccine-derived type 2 poliovirus (VDPV2) from human or environmental samples is considered a potential global public health threat that requires a rapid, coordinated response involving the Global Polio Eradication Initiative (GPEI) and national and subnational public health agencies.  This response may include rapid mass vaccination with monovalent type 2 oral polio vaccine (mOPV2). The mOPV2 vaccination in Ethiopia was part of the Horn of Africa synchronized campaign conducted in responses to the detection of circulating type-2 viruses in sewage and human samples of Somalia and Kenya.

The Horn of Africa Technical Advisory Group (TAG) in its 17th Meeting made particular emphasis on the continuing risk to the HOA countries including Ethiopia and strongly recommended a declaration of a public health emergency by mid-May for a concerted effort to respond to the outbreak. As part of this response measure, Ethiopia conducted two rounds of mOPV2 campaigns targeting under-five children in 42 woredas of Afder, Dawa, Korahe, Liben and Shebele zones of Somali region. All under-five children in the host and internally displaced communities of these zones and the five refugee camps of Liben were vaccinated. These targeted zones shares border with Somalia and Kenya.  The first round of mOPV2 Polio campaign was conducted from July 9-12 2018 synchronized with Kenya and Somalia. The second round, which was initially scheduled for the first week of August 2018 but postponed due to region wide civil unrest and conflict, was carried out from Sep 23 -26, 2018

According to Global Action Plan Version III (GAP III) guidelines, type 2 polio virus containing or potentially containing materials post switch should always be thoroughly handled and destructed using methods that can automatically inactivate the virus for minimizing the risks of infection of vulnerable population. In order to meet these requirements, UNICEF has facilitated the retrieval and destruction of all mOPV2 vials used in the country during the two rounds of the HoA outbreak response. Both used and unused vials were retrieved from health facilities and cold chain stores immediately following the completion of the campaign per the mOPV2 disposal guideline. The processes were supported by the disposal team that comprised of the Federal Ministry of Health and key GPEI and other EPI partners including WHO, UNICEF, Core Group Polio Project and Save the Children.

Of the total of 57,193 mOPV2 vials destructed and disposed, 53,579 vials were opened while the rest 3,614 were unopened.  The destruction was made using a modern high temperature incinerator owned by the Indut- Industrial – Medical Waste Management Plant, a private company. The incinerator has a capacity to produce temperature of as high as 1000-1300 0C that destroys all kinds of medical waste up to 130 kilograms per hour. The destructed mOPV2 vials weighted a total of 230 kilograms. The destruction of these vails was completed in two rounds each for one hour. The whole process of the destruction was witnessed independently by the national taskforce for containment (NTF) and inspectors from the Ethiopian Food and Drug Authority (EFDA).