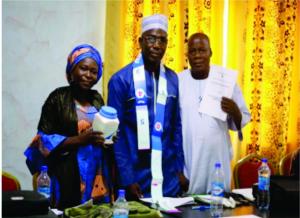 Abuja, 15 March 2019 - “My son had blood in his urine for almost a year and I didn’t know what to do,” says Rahab Haruna, a 45-year-old mother from Adamawa State.
“I went to several pharmacies and explained the symptoms, to no avail. When we went to hospital, he was diagnosed with Schistosomiasis. We were also told the drugs to treat the disease is scarce and we were given alternatives that did not work. I can’t wait to take this drug home to give to my son and his friends,” she exclaimed when given Praziquantel, the WHO recommended treatment against all forms of schistosomiasis.

Over the past three months, the World Health Organization’s (WHO) Expanded Special Project for the Elimination of Neglected Tropical Diseases (ESPEN) has supported Nigeria to reach over 2 million children who have never had Schistosomiasis treatment before.

Conducted across 27 LGAs in Borno, 18 LGAs in Adamawa and 3 LGAs in Bauchi state, ESPEN contributed in bringing the geographic coverage of treatment to 100% in Adamawa, Borno and Bauchi states.

People can get infected with Schistosomiasis during routine agricultural, domestic, occupational and recreational activities, which expose them to infested water. In addition, lack of hygiene and certain play habits of school-aged children such as swimming or fishing in infested water can make them vulnerable to infection. The economic and health effects of schistosomiasis are considerable and the disease disables more than it kills. In children, schistosomiasis can cause anaemia, stunting and a reduced ability to learn, although the effects are usually reversible with treatment. Chronic schistosomiasis may affect people’s ability to work and in some cases can result in death.

The Schistosomiasis treatment, ‘Praziquantel’, is effective, and safe; even though re-infection may occur after treatment. With this treatment, the risk of developing severe complication from the infection is diminished and mostly reversed when treatment is timely.

The World Health Organization has helped the country to have a complete mapping of where Schistosomiasis is endemic in the country. The mapping has shown that 583 of the 774 LGAs in the country have schistosomiasis. In addition to mapping, WHO provides Praziquantel drugs for mass drug administration (MDA). As of the beginning of this year, 449 of the 583 endemic LGAs had conducted at least one MDA including 190 that carried out MDAs in 2018 alone. All children at risk are reached and provided a dose of praziquantel during MDA campaigns. Capacities of health workers are built for the campaign as well as continued routine treatment.

“These MDAs are indeed what is what is needed. They are truly impactful and do touch on lives of many children,” stated Dr Anyaike Chukwuma, the National NTD coordinator.  “So far, I am glad to report that at least 2 million children have so far been reached this year and I looking forward to reaching even more by the end of the year.”

Dr Rex Mpazanje, speaking on behalf of the WHO Representative to Nigeria, indicated that “as with other NTDs, WHO is continuing to work with the Government and other development partners to advocate for and facilitate increased availability and access to treatment to end the scourge of Schistosomiasis.”

He further reveals, “Since the beginning of 2018, WHO has expanded its support to include actual conducting of MDA campaigns alongside implementing partner NGOs.” WHO’s work on schistosomiasis is part of an integrated approach to the control of neglected tropical diseases (NTDs). Although medically diverse, neglected tropical diseases share features that allow them to persist in conditions of poverty, where they cluster and frequently overlap.