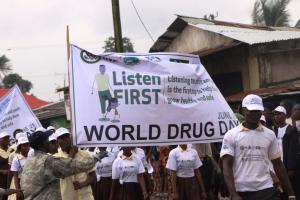 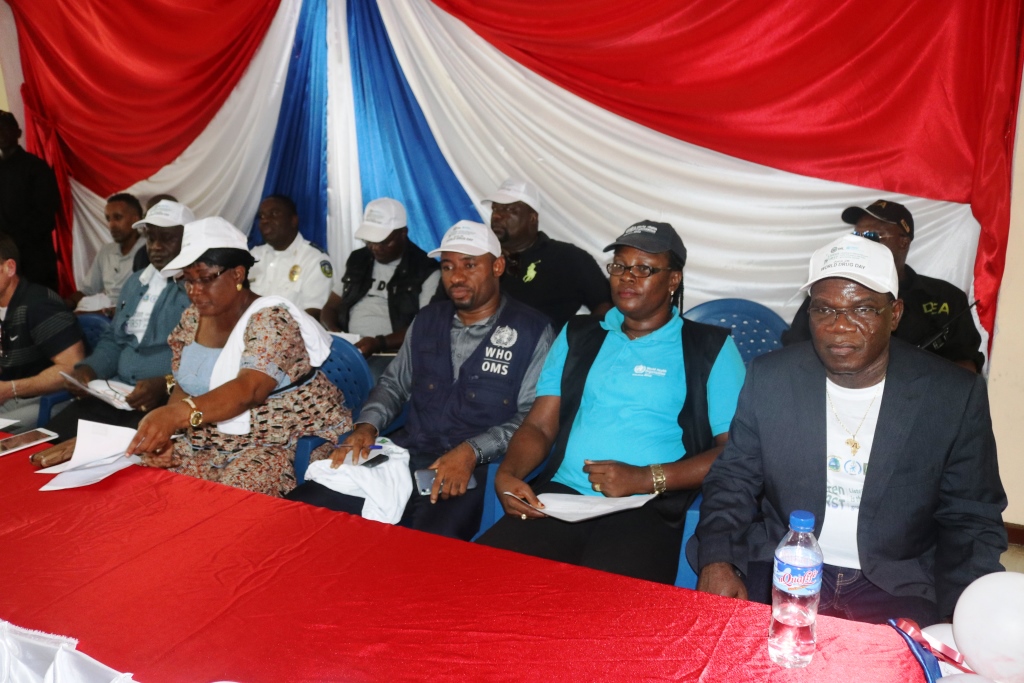 Monrovia, 26 June 2018: The Ministry of Health (MOH), WHO, Liberia Drug Enforcement Agency (LDEA) and other partners joined the rest of the global community in commemorating World Drug Day. This year’s theme,   Listen First - Listening to children and youths is the first step to help them grow healthy and safe, is aimed at raising awareness on the long term effects of drug abuse and mobilizing efforts to fight the increased use of drugs and other elicit substances. The celebration commenced with a grand parade from Logan Town (a suburb of Monrovia) to the New Kru Town (another suburb) in the city of Monrovia with a large concentration of urban ghettos.
During the indoor program, the Governor of the borough of New Kru Town, Honorable Alice B Weah in her opening remarks, described the selection of the venue as strategic as both Logan and New Kru Town have some of the biggest ghettos in the city of Monrovia. She lamented that, currently, there are over 866 ghettos in Monrovia that serve as home to chronic drug users and these ghettos are associated with illicit activities such as prostitution and crimes. She further indicated that the use and abuse of illicit drugs in the country is on the increase among the youthful population which constitutes more than 60% of the population and this calls for concern given the health implications.
According to the Guest Speaker, Rev. Dr. Jenkins Jorgbor, he stressed that the use of illicit drugs, such as cocaine, marijuana, and heroin is on the increase in Liberia and this resulting in very high levels of criminality and violence.  He stressed that drug use and abuse was strongly linked to Liberia’s 14 years of civil conflict, the lack of development programs for youth and high level of unemployment are associated root causes for the abuse of drugs by youths. He then recommended that the government should build rehabilitation centers for people engaged in the illicit use of drugs and strengthen current Laws and enforcement mechanisms.
Making remarks on behalf of the WHO Country Representative, Mr. Barkon Dwah, WHO Mental Health and Substance Abuse Lead,   cautioned students and the general public against the abuse of tramadol that has now become a public health challenge in Liberia.  He further stressed that once addiction sets in, it becomes difficult to control and desist from such habit. He then thanked all stakeholders that are collaborating with Government in the fight against drug abuse and pledged WHO continued support in collaborating with the MOH and partners in providing scientific and evidence based interventions geared towards addressing the current unfolding situation.
Making remarks at the occasion also were representatives from various institutions including:  Mrs Bisola Ojukutu, Country Representative of the Bureau of International Narcotics and Law Enforcement Affairs-US Department of States, (INL) Run Fleming, International Narcotics Law  Representative to LDEA,   representatives from the Ministries of Justice,  National Defense/Armed Forces of Liberia, Gender Children and Social Protection,  Liberia National Police, Liberia National Fire Service, ECOWAS, Trans National Crime Unit, UNODC, Carter Center,  Civil Society Organizations, among others.
During the program, more than 800 students, Officers of the Liberia National Police (LNP), Immigration and Liberia Drug Enforcement Agency (LDEA), the immigration services were sensitized on the effects of drug abuse and the importance of intersectorial collaboration in fighting the war on drug abuse.
Other activities carried out during the commemoration of the day included:  a live radio talk show to increase awareness and the burning of tons of illicit drugs, (marijuana, heroin, cocaine etc.) confiscated by the LDEA and the Liberia National Police which current market value was estimated at over $2,220,685.00 United States dollars.