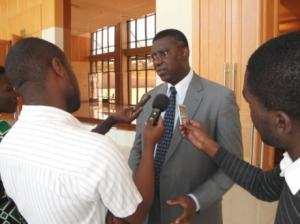 From 24 to 25 July 2014 at the Bingu International Conference Center in Lilongwe, the Ministry of Health convened a meeting of partners that collaborated in the implementation of the Human Papilloma Virus vaccine demonstration project in two districts. The aim of the meeting was to share the experiences and the lessons learnt during the one year of implementation and plan for the second year. By the end of the meeting, the participants developed the year two activities for dosing, integration and activity timelines. The dignitaries at the meeting included the Secretary for Health, Mr Chris Kang’ombe who was the guest of honour, WHO Representative (WR) Dr Eugene Nyarko, the Representative from Program for Appropriate Technology in Health (PATH)  Dr Chilunga Puta, Representative from UNICEF headquarters Sagri Singh and Director of Preventive Health Services of the Ministry of Health who is also the chairperson of the HPV vaccine demonstration project task force team, Dr Storn Kabuluzi.

In Malawi, Cervical cancer is the most frequent cancer among women affecting more than 2000 women and claims more than 1600 lives every year. Since 2004, the Ministry of Health and its partners have been trying to curb the burden of cervical cancer through implementation of screening programs and treatment interventions. However, most women die because they present late to hospitals at advanced stages of the cervical cancer disease.

In his opening remarks the Guest of Honour thanked all partners for all the technical and financial support they provided in the first year of the project. He went on to inform the audience that the project will prevent young Malawian girls in the two project districts from the pain and suffering of cervical cancer. He continued to elaborate that cancer as a Non-communicable disease is among the health sector’s priorities in the current Essential Health package (EHP). “I am pleased to inform you that we have the National Non-Communicable Diseases Action Plan (2012-2016) which includes comprehensive cancer control strategies such as screening, treatment and care of the patient,” the Secretary for Health said.

In his speech Dr Eugene Nyarko noted that the meeting was an excellent opportunity to decide on key actions that would form the basis for planning the second year interventions and the national roll out of the HPV vaccine demonstration project. “The findings of the HPV post introduction evaluation and the costing study including project progress reports will also set a benchmark for determining the necessary actions at various levels to ensure a smooth implementation in year two and envisaged national roll out,” he said.

The Representative from  PATH, Dr Chilunga Puta reminded the participants to be critical of the flaws and come up with actions to address them to support the roll out in year two. She urged participants to be focused in the discussions that followed during the meeting. “PATH will try as much as possible to provide the necessary support for women’s health such as the HPV vaccine demonstration project whose main aim is to prevent cervical cancer,” she said.

At the end of the two day meeting the participants at the workshop agreed to opt for the two dose HPV vaccine schedule instead of the three dose schedule which was in the original project design. This decision was reached because according to the WHO Strategic Advisory Group of Experts (SAGE) there is evidence that the efficacy of the two dose schedule is comparable to the three dose schedule. However, for this shift in dose schedule to be fully adopted by Malawi it would require the National Immunization Technical Advisory Group forum to endorse it. In addition, the meeting agreed to integrate information and education to the girls on growth and development, menstrual hygiene, sexual health and HIV education into the existing HPV vaccine project interventions. 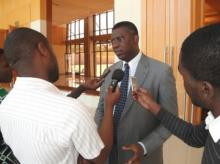