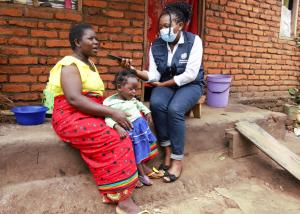 Clara Magalasi, who lives in a rural village near Lilongwe, the capital city of Malawi, woke up to a grey morning with a dull sky that was threatening rain. For Clara, the weather did not stop her from walking 4 kilometers to Chileka Health Centre. Her daughter Grace Butawo, who just turned 22 months, was due for her fourth and final dose of the RTS,S malaria vaccine. According to Clara, she was conscious about the dates to take her child for the final dose of the malaria vaccine as she understands its benefits.

“I understand that if my child gets all 4 doses, the vaccine will give her the most protection against malaria and severe malaria. Ever since Grace was born, she has never suffered from malaria, unlike my other children who experienced a lot of malaria episodes when they were the same age as Grace,” says Clara.

When added to currently recommended malaria control tools, the RTS,S malaria vaccine can reduce episodes of malaria in children by 40% and reduce life-threatening severe malaria by around 30%.

As of this month, Grace is one of the estimated 220,000 children in Malawi who have received at least one dose of the RTS,S malaria vaccine through routine immunization as part of a landmark pilot implementation in sub-Saharan Africa – led by the Ministries of Health in Malawi, Ghana, and Kenya, coordinated by WHO, and supported by in-country and regional and global health partners.

Two years ago, Malawi became the first country in the world to introduce the malaria vaccine into its childhood immunization programme, followed by Ghana and then Kenya. The vaccine was introduced in a phased approach that targeted 11 districts in Malawi.

Globally, more than half of childhood deaths occur in Africa, and malaria is a major cause of death. In January 2016, the World Health Organization (WHO) recommended pilot implementation of the RTS,S malaria vaccine in children to use alongside other malaria control interventions in settings of moderate-to-high parasite transmission. The malaria vaccine is the first and, to date, the only vaccine that can significantly reduce malaria in children.

The power of immunization to increase health equity

“To reduce childhood deaths, we can look to the potential of interventions like the malaria vaccine to deliver added malaria prevention on the successful child vaccination or EPI platform that reaches about 80% of children in the country. The vaccine provides considerable added protection against malaria to children. It is an additional tool alongside insecticide-treated nets (or bed nets) and it is also an opportunity to reach children not yet using bed nets or other malaria prevention interventions – the malaria vaccine could increase equity in access to life-saving malaria interventions,” said Dr Nonhlanhla Dlamini, WHO Representative in Malawi.

The Malawi Ministry of Health has in place malaria control measures such as insecticide-treated nets (ITNs) and indoor residual spraying with insecticides (IRS). However, there are still households in hard-to-reach areas that do not yet benefit from such interventions.

As Seliya Lawrence, also from rural Lilongwe, says, her house never got IRS but her 10-month-old baby has so far received 3 doses of malaria vaccine.

“I know about IRS but that programme did not come in our area. I am grateful that my child is getting malaria vaccine which can protect her from severe malaria,” said Seliya.

Hospital visits and admissions due to malaria put a financial burden on the vulnerable. In Malawi almost 60% of childhood outpatient health facility visits are due to malaria. Data from Chileka Health Centre in Lilongwe indicates a decrease in hospital admissions for malaria illness among children under age five years since the vaccine was introduced. Health workers say this drop may be due to the malaria vaccine.

Madalitso Chadewa, a Senior Health Surveillance Assistant at Chileka Health Centre says. “Since the malaria vaccine was introduced, it may have managed to keep many children out of the hospital.”

Chidewa says the pilot has also improved the routine immunization uptake. Before the pilot, most mothers would quit under-five clinic visits when their children get their last jab of measles at 15 months. But malaria vaccine has extended the immunization period to 22 months of age.

“When children come at 22 months, aside from giving them the RTS,S fourth dose, we also do growth monitoring and general health checks. These health checks are essential because they help to detect preventable health threats in the under-five children,” she says.

Malaria vaccine pilot in the context of COVID-19

WHO has been supporting the Ministry of Health to ensure the continuity of essential immunization and malaria services during the pandemic, including malaria vaccination in pilot districts. The malaria vaccine pilot has continued without major disruptions.

“We understand how COVID-19 has put pressure on our health system. It is important for us to ensure that child vaccination services, including the malaria vaccine programme, continues during this time because immunizations reduce child illnesses, save lives, and help relieve the strain on the health system,” says Dr Randy Mungwira, the WHO technical officer for the malaria vaccine pilot programme in Malawi.

Next steps for the malaria vaccine pilot

Data and experience from the malaria vaccine in pilot implementation will inform on how best to reach children with the 4-dose vaccine regimen, the vaccine’s impact on severe malaria and on lives saved, and the vaccine’s safety in routine use. So far, accrued safety data are very reassuring.

The pilot is progressing well, community acceptance of the vaccine is strong, and the programme is now on track for a review of RTS,S data and a potential WHO vaccine recommendation for wider use in sub-Saharan Africa as early as October 2021. If the vaccine is recommended for broader use, it could be a potent new addition to currently recommended tools to fight malaria, delivered through the childhood immunization platform.

As the world commemorates World Health Day 2021, WHO applauds the work of the national immunization and malaria programmes, at every level, for their contributions to building a fairer, healthier world. WHO is committed to ensuring that everyone, everywhere can the realize the right to good health.

WHO thanks Gavi, the Vaccine Alliance, the Global Fund and Unitaid for their generous support of the Malaria Vaccine Implementation Programme in the African region.