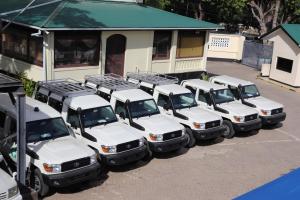 Tanzania is among the priority countries benefitting from the implementation of World Health Organization Emergency Preparedness and Response projects that aim to promote multisectoral convergence of resources and skills for rapid and efficient response to a disaster.

Initially implemented in select countries, the projects will be scaled up regionally over the next five years. To initiate the projects in Tanzania, WHO Tanzania has received eight vehicles that will be positioned within the Ministry of Health multisector coordination mechanism after the capacity-building activities with guidance from the Regional EPR Cluster.

Implementation of these projects embraces the fact that preparedness, and response to emergencies is a multisectoral undertaking, therefore preparedness efforts must also reflect that reality.

The aim of these projects is to develop in-country teams of highly skilled, resourced, and well-coordinated professionals capable of arriving at a location of disasters or disease outbreaks within the shortest time possible (within 72 hours) and coordinating a rapid response to minimize their effects.

The EPR cluster at WHO Regional Office for Africa (AFRO) works with national governments in the African Region to strengthen their capacity to prevent, prepare for, detect, and respond to health emergencies. The flagships will integrate and strengthen existing human resources for emergency response. Most countries across the continent have existing Public Health Emergency Operating Centres (PHEOCs), Rapid Response Teams (RRTs) and Emergency Medical Teams (EMTs) run by national governments.

“This is an opportunity for Tanzania to further strengthen the capacity in emergency preparedness, early detection and response. The resources, including the vehicles that have arrived already, will be positioned with the government. The aim is to foster government leadership, with WHO support and collaboration with a wide range of partners,” said, Dr. Zabulon Yoti, Acting WHO Representative in Tanzania.

The Emergency Preparedness and Response Lead at WHO Tanzania, Dr. Grace Saguti said the arrival of the 8 vehicles were an assurance that Tanzania will participate in the implementation of the Flagship Project.

“In the coming months we will be rolling out training building on available capacity in areas of coordination, surveillance, risk communication, but especially to this approach we are taking multisectoral outlook because disasters do not affect health exclusively,” said Dr. Yoti.