WHO applauds new Lancet Report on Cancer in sub-Saharan Africa 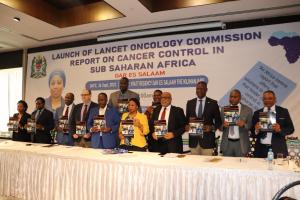 WHO applauds new Lancet Report on Cancer in sub-Saharan Africa

It is estimated that more than 1.1 million people in Africa will be dying from cancers annually in 2030 if the current growth of cancers is not checked.  Cancers constitute a significant share of a growing burden of non-communicable disease in Africa, with cancers resulting from infectious diseases being at the highest level compared to other regions of the world.

On 26th September, WHO in Tanzania participated in a symposium where the Lancet Oncology Commission launched a report on situation of Cancer in sub-Saharan Africa. Africa’s cancer explosion is attributable to external and internal factors, including infections, changing population demographics, behavioral changes, environmental exposures, and genetics. According to the report, in Africa, cancers associated with infections, including liver cancer (Hepatitis B and C viruses), cervical cancer (human papillomavirus), and Kaposi sarcoma (human herpesvirus 8), comprised 27% of all incident cancers in 2018—the highest percentage of any WHO region.

Experts from WHO Regional Office of Africa were some of the team members that contributed to the development of the report.

“The key findings and recommendations in the report will serve as benchmark in evaluation of national cancer control strategy and set a new action plan,” said Prof. David Collins, the Editor of Lancet Oncology. The recommended key actions, including the shared case studies and successful models, will help replicate, adapt, and enhance actions against the growing cancer crisis.

The incidence of cancer in Africa is increasing because of life style behavioral changes, population ageing, genetics, infections and environmental factors. Cancer incidence in Sub Saharan African is estimated to have doubled in the past 30 years

“We take seriously the recommendations of the report, including updating national cancer control plans, investing in developing cancer registries,” said Honourable Ummy Mwalimu the Minister of Health in Tanzania mainland who was the guest of honor of the symposium.

According to the Minister, most of the recommendations in the report are at different stages of implementation in Tanzania.  The minister informed the meeting that Tanzania is going to integrate Hepatitis in the National AIDS Control program and revive nationwide vaccination against HPV for younger girls.

The production of this reports reflects the shared commitment to reducing the incident of cancers and improving the quality of life of those who develop cancer. It is over 40 years since WHO started advocating for countries to have national cancer control plans to coordinate national efforts against cancer.

“This publication coincides with increased global and national attention on non-communicable diseases including cancer. We reiterate our commitment to continue working with the government of the United Republic of Tanzania and other African countries to bring the required technical assistance to implement the recommendations outlined in this report,” said, Dr. Alphoncina Nanai, on behalf of the WHO Country Representative, Dr. Zabulon Yoti.

The achievement from those years of effort has not improved much in terms of therapy and diagnostics in Sub Saharan Africa. The sub-region lags comparatively in access to the available diagnosis and therapy services and lack universal access to cancer services.

“A situation like this is not acceptable. For this reason, I urge all of you have a desire to improve the lives of cancer patients in Sub Saharan Africa,’ said Ummy. Also present at the symposium was the minister of health, community development gender, elderly and children in Zanzibar, Mr. Nassor Mazrui. In his remarks, at the end of the meeting, The Minister of Health Zanzibar said, we are to do this work and the United Republic of Tanzania is ready to put the recommendations to action.

In Tanzania in 2022 there were more than 26,000 deaths from cancer. Over 90 percent of cancer patients report in hospital when the disease is at advanced stages.

The WHO Country Office is collaborating with the United Republic of Tanzania to strengthen NCDs prevention and control covering risks assessment, services delivery, rehabilitation including use and systems to improve the availability of assistive devices. The organization is also working with the Prime Minister’s office to support establishing health in all policies approach to address the various social determinants of health against NCDs and other health priorities.