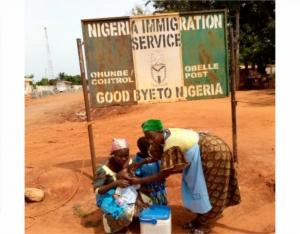 Abuja, 10 June, 2022 - When a team of vaccinators arrived in Obele, a boundary town between Nigeria and Benin Republic, to vaccinate children against the circulating Vaccine Derived poliovirus (cVDPV2), the community leader, Chief Babafemi Ogunmade was not surprised.

“We are aware that some vaccinators were coming to vaccinate our children against the polio and other diseases and we have been expecting them.

Other community  leaders joined me in  sensitising the people about the importance of immunization. We appreciate the intensified commitment from the government and partners, including the WHO, as the vaccination activities have reduced the number of complications and risks associated with measles and polio infections in our communities,” he said.

Obele is one of the many towns located in three Local Government Areas (LGA) (Imeko-Afon, Ipokia and Yewa North) of Ogun State (South West Nigeria) bordering the Benin Republic. The settlements are major cross border transit posts for social and commercial activities.

Across the border settlements, 4,670 eligible children were vaccinated during the Outbreak Response (OBR2) campaign in the three LGAs from May 14th to 17th 2022. Leveraging the campaign, vitamin A supplements and COVID-19 vaccination were administered in the settlements to eligible children and adults.

Tracking underserved population
To ensure no child is left unprotected against all forms of polioviruses or suffers the consequence, the Government of Nigeria is supported by WHO to adopt an initiative to improve immunization activities in cross-border settlements and amongst underserved populations.

Buttressing the importance of effective immunization activities at the border settlements, the Executive Secretary, Ogun State Primary Health Care  Board, Dr Elijah Ogunsola, said vaccination in the border communities is necessary because of its distance to the state capital, and the transiting population.

He appreciated WHO for its support in ensuring that all eligible children living within the borders are vaccinated will prevent the importation of the virus into the country.

Six LGAs in Cross River State share a national border with Cameroon and a total of 4,888 children aged 0-59 months were vaccinated.

The State Immunization Officer, Joy Chabo,  said periodical immunization activities are vital to prevent the importation of polio and vaccine-preventable diseases into the state.

“Due to the crisis in southern Cameroon, including social, and commercial activities, there is frequent transiting of the population between both countries.

Similarly in Rivers State, WHO worked closely with the state government and leveraged the OBR campaign to provide other immunization services in the nomadic settlements. Speaking on the intervention, Dr Bose Ezekwe, the state coordinator, said targeting the eligible children at the nomadic pastoralist settlements of the state was vital as they live beyond the reach of established health care facilities.

As a result, these groups are often under-immunized and out of the reach of existing disease surveillance activities. WHO worked with the state government in training and deployment of the teams to the high-risk areas.

Stressing the importance of quality outbreak response and surveillance for polio and other vaccine-preventable diseases in the country, the Country Representative, Dr Walter Kazadi Mulombo said, ‘WHO will continue to support government in its vaccination drive to shore up coverage and strengthen routine immunization in all the States.”

Nigeria and the African region were certified as wild polio-free in August 2020, but sustaining the feat is threatened by the high burden of cases of the cVPV2.  Furthermore, Malawi and Mozambique this year notified cases of wild poliovirus (WPV1) raising great concerns about international importation.

Following the Regional Directors' advocacy, Global Polio Eradication Initiative (GPEI) prioritized ten non-endemic countries in Africa to sustain the gains made.
Support for Polio eradication in Nigeria through WHO is made possible by funding from the Bill & Melinda Gates Foundation and the GPEI partners. 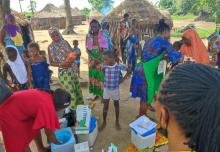