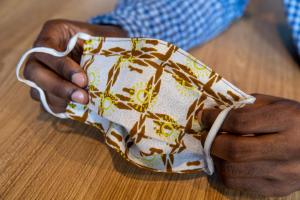 Lagos – When Zainab Olowoyo got COVID-19, she was one of thousands of people residing in the populous Lagos State whose case was not severe enough for her to be sent to the nearest isolation unit. Instead, Olowoyo received hospital-level care in her own home through a Home-Based Care programme implemented by the state government in collaboration with the World Health Organization (WHO). She had a smooth recovery and was cleared of the virus within 10 days.

“Being treated at home was the best arrangement for me,” Olowoyo says. “I received a COVID pack with everything I needed and never felt neglected as I also had daily calls from the health officials, who closely monitored my recovery.”

Having discovered its index COVID-19 case on 28 February 2020, Nigeria has since recorded nearly 169 000 cases and 2125 deaths from the virus. As confirmed cases surged during the two waves the country has witnessed, Lagos state became the epicentre of the outbreak, accounting for 35% of cumulative cases, which threatened to overwhelm local health systems.

During the initial surge implementation phase of Home-Based Care between February and April this year, 1060 people were managed under the programme in six high burden districts of Lagos state without a single death being recorded. This accounted for 81.4% of the total number of cases. The programme was subsequently extended to all 37 Nigerian states and the country’s Federal Capital Territory.

“The benefit of the Home-Based Care arrangement in Nigeria is two-pronged; firstly, it is a patient-centred approach to care, and secondly, it frees up limited bed spaces in the treatment centres for the more severe cases of COVID-19,” says Dr Comfort Kusimo, World Health Organization (WHO) Incident Management System Coordinator in Lagos state.

“The Home-Based Care approach drastically reduced the bed occupancy in our isolation centre, thereby increasing our capacity to manage those in need of emergency care,’’ says Dr Olusola Adejumo, a clinician at the Lagos state infectious disease isolation centre.

Meanwhile, patients like Olowoyo who was asymptomatic or experienced only mild symptoms and had no underlying co-morbidities were managed and monitored entirely in their own homes. In addition to an initial face-to-face evaluation and subsequent monitoring through text messages and phone calls, they were also provided with psychosocial support. If they developed severe symptoms, they were transferred to the nearest isolation centre for further treatment. After recovery, they received follow-up calls for between 14 and 28 days.

Dr Kusimo of WHO attributes the success of the programme to the careful selection of medical officers and clear communication between them and their patients, as well as regular feedback to the state.

“The most important reason why this intervention worked so effectively was the passion and commitment that was brought to the fore by these medical officers, who voluntarily enrolled to help support the decentralization of care,” he adds.

In each of Lagos state’s six high burden districts, there were weekly coordination meetings where medical officers would provide a report of all patients under their care, fostering a strong culture of accountability.

“I felt proud to be part of the Home-Based Care programme,” says Dr Koseda Omogbemi, one of the medical officers involved. “It helped me to reach and support patients safely and efficiently.”

“Home-Based Care has not only helped to reduce the strain on local government resources, but also to alleviate fear and stigma around the virus within the community,” says Dr Rosemary Onyibe, WHO Zonal Coordinator for the Southwest Zone, which comprises Lagos state. “Many people’s understanding of COVID-19 has been significantly improved, and they will now be better equipped to play their part in the ongoing response.”