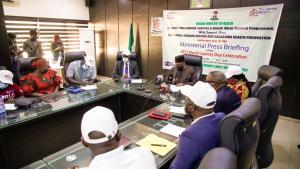 Abuja, 1 February, 2022 - In commemoration of the 2022 World Leprosy Day, the Government of Nigeria and Partners have decried the continuous stigmatization of people living with the disease.

The Honorable Minister of Health, Dr Osagie Ehanire, speaking at a ministerial press briefing to mark the day in Abuja on 31st of January 2022, said stigmatization continues to have negative impact to the successful elimination of the disease and re-integration of those cured back into their communities.

Dr Ehanire noted that leprosy is a public health issue and puts the country among the last nations in the world to defeat the disease, with more than 1,000 new cases still reported in a year.

“Efforts to combat the disease is still affected by challenges. Stigma and discrimination against persons affected by leprosy and their families remains a challenge. The wrong beliefs that it is contagious, hereditary or ordained punishment and the fear of rejection by family and friends, deter victims from seeking early care if they suspect leprosy and discourage those cured of integration back into their communities.

The commemoration of the 2022 World Leprosy Day draws attention to the plight of fellow citizens living with the age-old disease. We mark this occasion again with a review of Nigeria's efforts to end the disease. About 18 states are still witnessing its features as an endemic disease in the whole country, he said.

In his goodwill remark, the WHO Country Representative (WR), Dr Walter Kazadi Mulombo, appreciated Nigeria's efforts on the Leprosy Programming, saying the country is not yet out of the woods as it remains important in the global Leprosy eradication road map.

The WR said the notification of new cases and the Grade 2 disability is a problem among patients as cases could be prevented by early diagnosis, contact tracing and ensuring adherence to treatment.

He added this year’s theme "United for dignity", emphasizes the need for increased collaboration by all stakeholders to put hands together to ensure increased efforts towards elimination of Leprosy and prevention of the disabilities it causes.

Dr Mulombo pledged WHO's commitment to collaborate with other key partners to step-up action in supporting the Federal Ministry of Health to mobilize the needed domestic and international resources required for the control, elimination and eradication of Leprosy and other neglected tropical diseases in the country.

He said WHO is also committed to facilitating the donation of all needed medicines for Leprosy as it has always done each year.

“Finally, I want to encourage individuals, communities, and local governments to encourage surveillance, testing and treatment for leprosy and to learn more about this disease, to end the silent epidemic”, he added.

World Leprosy Day is marked annually on the last Sunday in January. Leprosy or Hansen's disease is a chronic infectious disease caused by a slow-growing bacterium, Mycobacterium leprae (M. leprae). “It is an age-old disease, described in the literature of ancient civilizations. Throughout history, people afflicted have often been ostracized by their communities and families”.

The commemoration is aimed at celebrating people who have experienced leprosy, raising awareness about the disease, and calling for an end to leprosy-related stigma and discrimination.