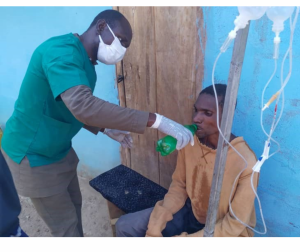 It was noon at a health facility in Amaozanu Community, located at Ishielu Local Government Area (LGA), Ebonyi state.

Lying on a bed at the cholera treatment unit (CTU) with a drip (intravenous fluid or IV) on his hand is Mr Onwe Godwin, a 56-year-old from Amuhu Village in Ishielu LGA,

He had been admitted to the hospital for three days, but cannot recall or trace how he contracted the disease.

Narrating his experience, he says “I was passing watery stool for about 24 hours but did not know how I got to the hospital.

He is still weak and recovering from cholera, a deadly bacterial disease that causes severe watery diarrhoea, which can lead to dehydration and even death if untreated.

“The experience was not good and do not pray for it to happen to me again. It started with abdominal pain, which later resulted in me passing watery stool. I went to the toilet over 10 times and suddenly became very weak only to wake up at the health centre,” he says.

The neighbour who eventually died of the disease was traced by the health workers as the index case in Ohaukwu village.  She presented all cholera symptoms (vomiting, stooling and fever), but had no idea what she was dealing with.

“ The experience has not been pleasant because as an adult, I never thought I could soil myself. I started stooling and vomiting three days after the death of my neighbour and got so weak only to wake up at the hospital, she says.

Now that they are both recovering, they intend to keep better hygiene procedures, boil their water before drinking and raise awareness about the preventive measures for cholera in their respective communities.

In swift action to curb the spread of the disease and ensure the health and safety of residents across all Ebonyi communities, the  State Government in collaboration with World Health Organization (WHO) and other partners activated an emergency operation centre.

“As soon as the state epidemiologist got news of the outbreak, a Rapid Response Teams (RRT)  was deployed with support from WHO to the affected communities. This was to ensure that the morbidity and mortality are kept at the barest minimum,” says Dr Daniel Umezurike, Ebonyi Commissioner for Health.

The commissioner applauded WHO for being a dependable partner by providing technical guidance to the state to guarantee quality health service delivery.

“This is evident with the recently concluded surveillance training of health workers which was instrumental to the early detection and reporting of the current outbreak. They have been instrumental in coordinating other partners and intervention activities across the State and down to the communities,” he says.

Additionally, the WHO team provided technical support in the development and operationalization of the cholera preparedness and response plan, mobilising other partners in the State.

He added that the government would provide boreholes and construct toilets for the LGAs as a way of tackling water scarcity and open defecation in the area.

A situational analysis of the outbreak was linked to unsafe water, sanitation and hygiene (WASH) and coupled by importation and low history of cholera vaccination coverage in the area

Commending the government for their action Dr Vivian Chinelo Ibeziako, WHO State Coordinator Ebonyi State, said that the quick intervention yielded positive results in the state leading to a decline in cases now being reported.

“To curb the transmission of the cholera outbreak, WHO collaborated with the  Nigeria Centre for Disease Control (NCDC) to provide medical supplies (rapid diagnostic testing kits) and other sample collection and transportation kits to be used from LGAs to the State Public Health Laboratory.

Additionally, WHO mobilized  134 trained surveillance focal persons across the State for sensitizing the clients, early detection and reporting as well as supported the state in conducting community sensitization campaigns with preventive messages.

So far, cases are declining and about 135 patients have been successfully managed and discharged from the treatment centres,” she added. 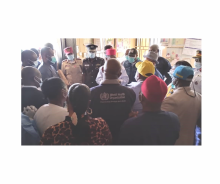