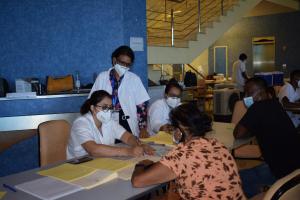 Port Louis – Until recently, Cindy Frederic was among the less than 100 000 Mauritian adults still unvaccinated against COVID-19. Living with a COVID-19 comorbidity, she was anxious about how the vaccine might affect her health.

“I sought information from my doctor,” recalls Frederic, describing how the staff at her local health centre reassured her. Thanks to them, she says, “I am quite confident that the vaccine will help me to avoid getting severe forms of COVID-19.”

Fears and anxiety about the COVID-19 vaccine were among the hurdles the health authorities in Mauritius had to overcome to expand vaccination coverage, which is among the highest in Africa. To date the Indian Ocean island nation has vaccinated 76% of its population with the two vaccines doses. Across the continent, vaccination rate stands at 13% currently.

When Mauritius kicked off COVID-19 vaccination in January 2021, it set a goal of vaccinating 60% of the population by September of that year. It reached the goal a month in advance.

How did they do it?

The health authorities devised a national vaccine deployment plan as COVID-19 vaccine were becoming available in December 2020. A key plank of the strategy was facilitating people’s access to the vaccines. This meant deploying mobile teams to communities to set up neighbourhood vaccination sites and to administer doses at home to those unable to reach the vaccination stations, for instance, those living with disability. This was in addition to health facility-based vaccination services. Private clinics were also drawn to bolster the vaccination campaign.

A core vaccination team was trained in immunization surveillance and management as well as cold chain supply and maintenance and additional health workers recruited. The country also allocated funds to procure vaccines early and in significant quantity. With support from World Health Organization (WHO), the country negotiated the purchase and donation of COVID-19 vaccines through the COVAX Facility and initiated deals to procure more vaccines.

Mauritius was among the first African countries to launch COVID-19 vaccination campaigns. The country sourced various vaccine types and gave regulatory clearances to accelerate the rollout. As in many countries, priority was given to front-liners including health workers, police officers, hotel staff, airport personnel and senior citizens. Schools and other public facilities were repurposed for the vaccination drive and a further extension of the programme eventually targeted youth aged 12 to 17.

To reinforce the efforts for an effective vaccine rollout, WHO deployed an expert on cold chain management, supported health worker training, provided guidance and technical advice to the government in designing a vaccination plan and outlining high-risk population groups to be given priority and how to effectively administer the available doses to them.

“The Organization played a key role in facilitating the proper management of vaccines according to WHO guidelines, and the recommended measures were well implemented by the country,” says Dr Laurent Musango, WHO Representative in Mauritius.

As of 21 February 2022, around 928 000 people had been fully vaccinated in the island nation home to 1.3 million people while about 965 000 have received a first dose vaccine. Ninety-four per cent of people aged 15–17 years have been vaccinated and around 44% of children aged 12–14 years have also received the vaccines.

Indira Ramjattun, a nurse and coordinator at one of the vaccination centres in the capital Port Louis, says that when they start vaccination at eight o’clock in the morning, “already 400 to 500 people are queuing outside.”

In the early days of the campaign, an alphabetical-order system was set up to limit overcrowding at vaccination centres and reduce the risk of transmission of the virus.

The country has also taken measures to counter vaccine hesitancy with ongoing awareness campaigns and community engagement. The population is constantly exposed to daily messages on television, radio and social media to strengthen public health measures including the proper wearing of face masks, hand hygiene and social distancing. Additionally, the government introduced tax on petroleum products to sustain the COVID-19 vaccine rollout as well as legislation to bolster vaccine uptake.

Many Mauritians fail to return as scheduled for their second dose, for various reasons—either because they have forgotten, travelled, reside in movement-restricted “red” zones where rapid spread has been identified, are in self-isolation, or simply choose not to. In response, a team has been assigned to reschedule those who miss their second dose and to motivate the reluctant.

Still, the pandemic experience has motivated the country to boost the pharmaceutical industry as a pillar of its economy. The government has announced plans to allocate around US$ 23 million to spur the domestic production of COVID-19 vaccines and other pharmaceutical products. Additional fiscal incentives are on offer, including tax credits and tax exemptions for private companies to construct factories.