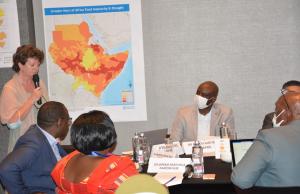 The health risks in the region are increasing, while access to health care is deteriorating

Nairobi, 30 June 2022 | WHO is scaling up its operations in eastern Africa as the region faces acute food insecurity caused by conflict, extreme weather events – including the worst drought in 40 years – induced by climate change, rising international food and fuel prices and the impact of the pandemic.
Over 80 million people in the eastern African region are food insecure and resorting to desperate measures to feed themselves and their families. Acute malnutrition is high, especially among children.
As malnutrition increases, the health needs in the region are mounting, especially among children, and clean water is becoming scarce. As people leave their homes in search of food, they can no longer access health services, and become more at risk from disease outbreaks.
“The cost of inaction is high,” said Dr Ibrahima Socé Fall, WHO Assistant Director-General for Emergency Response.  “While the clear priority is to prevent people from starving, we must simultaneously strengthen our health response to prevent disease and save lives. Even one life lost from a vaccine-preventable disease, diarrhoea, or medical complications from malnutrition in today’s world is one life too many.”
Dr Fall was speaking in Nairobi where WHO convened a two-day meeting [26-27 June 2022] to plan its response across the seven countries affected by the health emergency – Djibouti, Ethiopia, Kenya, Somalia, South Sudan, Sudan and Uganda – and coordinate with other UN agencies and partners.
WHO’s emergency response is focused on ensuring affected populations can access essential health services, treating sick children with severe malnutrition, and preventing, detecting and responding to infectious disease outbreaks.
WHO is setting up a hub in Nairobi, from where it will coordinate the response and organize the delivery of life-saving medical supplies to where they are needed most.  These supplies include medicines, vaccines, as well the medicines and equipment needed to treat children who are severely malnourished. Other than providing these critical supplies, WHO is working with ministries of health in the affected countries to set up robust disease surveillance systems to be able to quickly detect and respond to disease outbreaks.

Note to editors
•    Four consecutive rainy seasons have failed in the region, a climatic event not seen in at least 40 years. The latest forecasts suggest that there is now a concrete risk that the next rainy season could also fail (source: WMO).
•    Over 80 million people in the Eastern African region are food insecure (source: WFP), where they have to resort to desperate measures in order to feed themselves and their families.
•    The situation is particularly urgent in the drought-affected areas of Ethiopia, Kenya and Somalia where a lack of food means that an estimated 7 million children are malnourished, including over 1.7 million who are severely malnourished (source: Unicef). Severe acute malnutrition is a life-threatening condition requiring urgent treatment.
•    Different countries are affected differently. For example, in Uganda, the problem is concentrated in the north-eastern region, while in South Sudan, over 60% of the population is facing a hunger crisis.
•    All seven countries (Djibouti, Ethiopia, Kenya, Somalia, South Sudan, Sudan and Uganda) are dealing with outbreaks of measles and cholera.
•    All seven countries are malaria-endemic countries. Children are disproportionately affected by malaria, with 80% of malaria deaths in the African region being among those under the age of 5 years.
•    Four countries – Somalia, South Sudan, Sudan and Uganda – are facing outbreaks of meningococcal meningitis, a serious and potentially fatal bacterial infection.
•    This region has seen years of conflict and displacement. 4.2 million people in the region are refugees, and another 11.1 million are internally displaced (source: UNHCR). 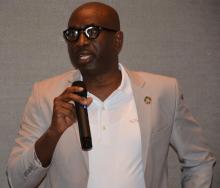