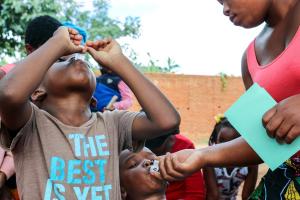 The Oral Cholera Vaccine (OCV) campaign started in Lilongwe on 17 April 2018. The vaccine is being administered from 17 to 21 April and is targeting all people that are over one year and living in urban and semi urban areas of Lilongwe city where the cholera outbreak is still active. These areas are within the catchment areas of the following health facilities: Area 18, Kawale, Area 25, African Bible College, St Kizito, Chimwala, Bwaila and Likuni. A total of 500,000 people are expected to receive OCV.

The vaccine, Euvichol-plus, a World Health Organization pre-qualified vaccine is administered orally as 1.5mls per dose. It is given in two doses with at least two to six weeks’ interval. In preparation for the campaign the District Health Office in Lilongwe trained a total of 300 health workers comprising nurses, clinicians, health surveillance assistants and environmental health officers. In addition, 300 volunteers were trained to support the campaign.

The Global Task Force for Cholera Control of the World Health Organization is the one that provided the OCV, from its emergency stockpile, for the people of Lilongwe. The WHO has funded the operation plan of the district to implement the campaign. The vaccine will be given to close to 571,109 people living in the mentioned areas.

As a background, the first cholera case was reported by Karonga District Health Office on 24 November, 2017. As of 15 April this year 904 cases including 30 deaths had been reported from 13 districts. Of these 30 deaths 12 were community deaths and the case fatality rate is 3.3 per cent. The week beginning 16 to 22 April a total of 15 new cholera cases were reported from cholera hot spot areas in Lilongwe.