Ministry of Health, WHO and USAID strengthen protection of Health Workers During the Ebola Outbreak Response in Uganda 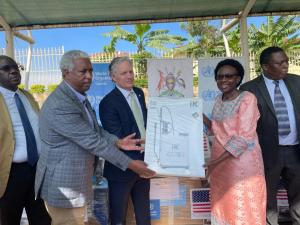 Ministry of Health, WHO and USAID strengthen protection of Health Workers During the Ebola Outbreak Response in Uganda

Kampala - The Ministry of Health in Uganda has received from the United States Agency for International Development (USAID), through the World Health Organization (WHO), an assorted set of supplies to constitute three Viral Haemorrhagic Fever (VHF) Kits to enhance the protection of health workers responding to the Ebola outbreak.

The VHF kits, handed over at the Ministry of Health headquarters in Wandegeya, consist of Personal Protective Equipment and other Infection Prevention and Control supplies for health workers to safely care for Ebola patients in treatment centers.

"Viral hemorrhagic fevers (VHFs), including Ebola virus disease, expose health workers and their families to unprecedented levels of risk. The use of an appropriate VHF kit is the only way to ensure the protection of health workers when caring for Ebola patients," said the Honourable Dr. Jane Ruth Aceng Acero, Uganda's Minister of Health.

"Without health workers, there is no life. Viral Hemorrhagic Fever Kits have proven invaluable in preventing Ebola transmission, not only in treatment centers but also in the various activities carried out during the management of Ebola patients, such as cleaning, waste management, and safe burials,” said Dr. Yonas Tegegn Woldemariam, the WHO Representative to Uganda.

Dr. Yonas added that the provision of these supplies is in line with WHO's role, which is to ensure that health systems can prevent and respond to shocks, crises, and emergencies that affect their populations.

"The supplies we are donating to support the Ebola response are the result of a strong and stable collaboration between the Ministry of Health, WHO, and USAID. The United States Government is committed to supporting Uganda to respond to health issues including viral hemorrhagic fevers,” said Mr. Richard Nelson, USAID/Uganda Mission Director.

On 20 September 2022, Ugandan health authorities declared an Ebola outbreak after the confirmation of a case in Mubende district by the Uganda Virus Research Institute (UVRI). As of 6 October 2022, forty-four (44) confirmed cases and ten confirmed deaths, including four (04) health workers (case fatality rate of 21%) have been reported in five (05) districts. Seven (07) recoveries have also been recorded since the beginning of the outbreak.

In response to this outbreak, the Ministry of Health has activated response efforts to rapidly contain the spread with support from Health Partners including the World Health Organization.

The UN has deployed technical, financial, and operational resources to support the response under the guidance of the health lead, WHO. In line with the Emergency Response Framework, WHO is leading partner coordination efforts with the Ministry of Health to ensure rational, effective resource mobilization. Also, to ensure support to human resources, 21 WHO staff have been deployed to national and district levels across all technical pillars in addition to health worker deployment.

The organization, with USAID contributions, has supported the training and deployment of 894 Village Health Teams and Contact Tracers to support surveillance activities in communities. In support of case management and Infection Prevention and Control, the three USAID-funded Ebola kits were provided to Mubende Regional Referral Hospital to manage over 300 health workers, and District Task Forces (DTFs) in 20 high-risk districts were activated. Risk communication and community engagement activities are ongoing in affected districts using community radio spots, megaphone announcements, community meetings, and interpersonal communication.

The Ebola Virus Disease is introduced into the human population through close contact with the blood, secretions, organs or other body fluids of infected animals found ill or dead. The virus then spreads through human-to-human transmission via direct contact (through broken skin or mucous membranes) with either blood or body fluids of a person who is sick with or has died from Ebola virus disease.