Managing HIV In The Midst Of A Health Emergency 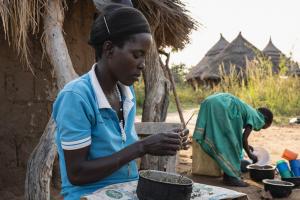 Managing HIV In The Midst Of A Health Emergency

Akwii Magdalena is a seven-year-old girl enrolled in a primary school class in Kapelebyong District from the Karamoja Region of Uganda. The third of three children, Akwii is living with HIV just like the 87,719 children affected by the disease in the country.

When she was first taken to Kapelebyong Health Centre IV in 2014, she was so small and sickly. After examination, the health worker discovered that she had developed TB and had a rash on her body. At the time, Akwii was living with her aunt, who depended on casual labor such as land plowing to feed her family.
"When the doctor told us that my daughter had TB, a complication of the disease, I lost all hope. I thought she would die," says Asio Sarah Maria, her aunt.

Like all people living with HIV in Uganda, Akwii was immediately put on antiretroviral therapy (ART) and her health improved dramatically, giving her family hope. But Akwii did not always have the support to attend her medical appointments and take her medication on time, putting her progress at risk.

In 2021, WHO updated its consolidated HIV guidelines for Screening, Treatment, Optimization and Prevention of Advanced HIV Disease among Children and Adolescents living with HIV. Adopted by the Ugandan government, these guidelines bring in the most recent guidance on HIV testing strategies ‒ the entry point for HIV prevention and treatment ‒ and include comprehensive guidance on infant diagnosis.

“As WHO, we always make sure that all HIV policies are inclusive,” says Dr Kaggwa Mugagga, the technical officer in charge of the HIV/AIDS Programme at World Health Organization in Uganda. “We have also been conducting a series of community mobilization to raise awareness on the disease and encourage the population to test for early treatment.”

The WHO HIV guidelines also include updated recommendations on the timing of antiretroviral treatment for people with TB and the use of point-of-care technologies for monitoring the treatment of HIV patients.
"With the new patient tracking technology, we are able to report clear figures on cases and monitor their treatment appointment schedules,” says Oluka Jonson, nutritionist at Amuria General Hospital. “We make sure we call irregular patients the eve of their appointment to remind them to attend.”

This monitoring system has been of great benefit to Akwii as her aunt was now able to properly support her niece who has greatly improved. In October 2022, the medical report showed that her nutrition status was normal, the skin had cleared, her viral load had been suppressed and her weight was steadily increasing.

For the past three years, an acute public health crisis resulting from the deteriorating drought situation has affected the northeastern region of the country, specifically the Karamoja and Teso regions. Like Akwii's family, people in this region are currently facing the resulting food insecurity and other public health emergencies.

Of the 249,120 children living in the Karamoja region, 91,610 are acutely malnourished according to the 2022 integrated food security classification.

WHO, in collaboration with the Ugandan government, regularly conducts training for leaders in the region to raise awareness of the scale of the crisis. Health workers have also been trained in the integrated management of acute malnutrition, including in patients affected by HIV/AIDS.

“The training has given us more capacity and motivation to follow up cases and has rejuvenated the type of interventions we do. We have adopted integrated assessment from outpatient, antenatal, maternity, antiretroviral treatment and during immunization and health education sessions,” says Jonson.

In addition to items such as ready-to-use therapeutic food, WHO has helped the country develop a response plan, and provided various commodities, personal protective equipment, and technical assistance through the appointment of an incident commander.