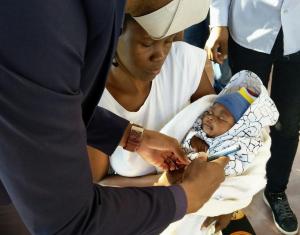 Maputo, 7 July 2022 – Mozambique today kicked off the third round of vaccination against wild poliovirus type 1 as southern Africa countries launch a further drive to protect all under 5 children and halt the debilitating virus from spreading. Neighbouring Malawi, Tanzania and Zambia will also embark on the third phase of mass vaccination campaigns in the coming weeks.

Around 36 million vaccine doses have been administered by the four countries in the first two rounds. The mass vaccination campaigns were launched after an outbreak in Malawi – the country’s first wild poliovirus case in 30 years. Mozambique also detected a case in May. Only two cases of wild poliovirus have been confirmed in this region in 2022.

The cases detected in the two countries do not alter Africa’s certification as free of wild poliovirus – an achievement declared in 2020 – because the virus strain is not indigenous. Laboratory analysis linked the strains detected in Malawi and Mozambique to a strain circulating in Pakistan’s Sindh Province in 2019.

Zimbabwe will join the vaccination campaign for the third and fourth rounds. Although the country does not share a border with Malawi, frequent cross-border movements heighten the risk of wild polio outbreak. Zimbabwe will conduct two more rounds later this year to ensure full vaccination coverage of all under 5 children.

“Every effort is being made to vaccinate every eligible child. This is a dangerous disease with no cure, but full vaccination can prevent paralysis” said Dr Modjirom Ndoutabe, Polio Programme Coordinator at World Health Organization (WHO) Regional Office for Africa. “We are supporting these five countries to deliver quality and effective vaccination campaigns, which will safeguard children and stamp out the virus.”

The multiple vaccination rounds aim to ensure that every under 5 child is fully vaccinated against poliovirus in the at-risk countries. To accomplish this, WHO and partners, including UNICEF, Bill and Melinda Gates Foundation, United States Centers for Disease Control and Prevention, GAVI, the vaccine alliance, and Rotary, are working with the national authorities to bolster planning, delivery and monitoring of the vaccination drives.

"This third round of mass vaccination campaign brings us closer to protecting all children under five years of age across Mozambique against poliovirus. WHO and partners are working tirelessly in support of the government to end the threat posed by this debilitating disease,” said Dr Severin von Xylander, WHO Representative in Mozambique.

Wild poliovirus transmission remains at an all-time low, with only six cases reported globally in 2021. Importation of any case must be treated as a serious concern and high-quality response efforts to reach every child with polio vaccine are critical to prevent further spread.

Wild poliovirus type 1 is currently endemic only in Afghanistan and Pakistan. The poliovirus is highly infectious and largely affects children younger than five years. The disease can cause lifelong paralysis and can be prevented only by immunization.