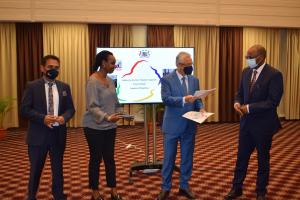 The World Health Organization and the UNRC office collaborated with the national authorities in addressing the lack of evidence-based information on drug use at the national level through the recruitment of an international expert to conduct the survey as well as several Integrated Biological and Behavioural Surveillance Surveys among drug users from December 2020 to May 2021.

The Prime Minister said that the Government alone cannot fight the drug war and the magnitude of the drug problem requires all stakeholders to engage in collaborative platforms to ensure that policies and strategies are implemented based on evidence-based information.

The findings and recommendation of the survey report will provide policy-makers, programme managers, and practitioners, with information that will improve understanding of the causes of drug abuse for target actions to delay or prevent initiation of substance use and reduce harms related to drugs, said Hon. P. K. Jugnauth.

“Evidenced-based information will help to shed light on changing patterns of drug use and set the pace for stronger monitoring of programmes and policies,” said the Prime Minister.  The latter acknowledged the contribution of the UN Resident Coordinator Office and the World Health Organization and the International Consultant, Dr Lisa Johnson in this initiative.

The national survey report complements further the existing materials and documents such as the National Drug Control Master Plan 2019-2023 elaborated by the Government of Mauritius with UNODC support.  The four pillars of the Plan being drug Supply Reduction, embracing law enforcement and financial crimes; drug Demand Reduction, comprising drug use prevention, drug use disorders treatment, rehabilitation and social reintegration; harm Reduction, such as methadone maintenance therapy and the needle Exchange programme; and finally a coordination mechanism relating to legislation, implementation framework, monitoring and evaluation and strategic information.

Her Excellency Mrs C. Umutoni advocated for concerted effort to address this global problem and emphasized that it is in this spirit that the UN forged a partnership in Mauritius.  She expressed satisfaction as regards the people-centered and participatory approach put in place by the Government to address the drug problem in the country .

The UN Resident Coordinator underlined the importance of engaging in measuring and surveillance to efficiently tackle the drug issue.  Evidenced-based information available in the report will help to save lives and enable targeted interventions at the policy-making level.

Dr L. Musango, the WHO Representative, in his address stated that the launching of the survey report on drug use in Mauritius is a milestone in terms of the availability of evidence-based information on drug use.  The survey report is filling a gap that was often highlighted in the past, he said.

“The situation in Mauritius regarding the drug phenomenon is constantly evolving, especially with the rise in the trafficking and use of synthetic drugs during the past recent years,” highlighted Dr L. Musango.  He added, “the availability of evidence-based information is crucial for timely mobilization of resources and upstream actions to reduce and eliminate the health damages caused by drug use such as overdose and loss of life.”

Dr Musango underlined “the vulnerability of young people to start using drug very early at the young ages, that is less than 24 years old, and how they are targeted by the market.” He stressed the emotional, health, and social impact of the drug problem among youth in society.

WHO Representative extended his support in implementing the recommendations of the report especially in the national efforts to reduce stigma and discrimination of people with drug user disorders as this can be a barrier to access services; to promote access to appropriate, affordable, and friendly treatments so that drug users can successfully come out of this problem and lead a healthy and safe life; promote a multisectoral, integrated approach and support to address drug use among the population; and to monitor changes in drug use behaviors and evaluate the impact of interventions so that we know where to best direct our efforts.

Dr L. Musango expressed on my behalf and on behalf of the Regional Director of the African Region, Dr Moeti and the Director-General of WHO Dr. Tedros, his appreciation to the Prime Minister of Mauritius for his leadership and commitment and the efforts of the Government in addressing the drug problem in Mauritius.   The leading role of the Prime Minister in chairing the COVID-19 High-Level Committee and leading actions to fight the pandemic as well as in promoting physical activity; in the prevention and control of Noncommunicable Diseases, and in improving the health infrastructure and equipment in Mauritius, among others, was highly appreciated by WHO.    Dr Musango reiterated the commitment of WHO in supporting the country at the three levels of the organization, that is the country level, regional, and  Head Quarters level to protect the population from the drug scourge and promote a healthier population.

Mauritius has set have set out a series of policies and actions to address the proliferation of drugs including law enforcement to combat trafficking under the National Drug Control Masterplan in 2019-2023, developed in collaboration with the United Nations. The authorities have set up a dedicated centre for the rehabilitation of youngsters with substance use problems in 2018 and five Addiction Units are operational in the different regions to facilitate access to health services. A Drug Offenders Administrative Panel will be set up by the country, an initiative based on a human rights approach in the treatment of people having substance use disorders, to improve treatment and rehabilitation. The national response to the drug issue is overseen and led by the High-Level Drugs And HIV Council since January 2019.