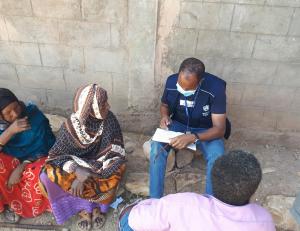 Sa’Ada, 36, was displaced from her home in Gunagado Woreda of Jarar Zone, Somali Region due to drought. She and her husband came to Qoto Rooble Kebele in Kebribayah Woreda with their nine children in search of pasture for their livestock and food for their family. After walking a few miles to their destination, she resorted to hiring two pick-up trucks for her cattle and goat to preserve their energy as they were already affected by the lack of feed and water. She said that she paid 400 birr per head for cattle and 80 birr per head for goats, which was more than what she could afford but an amount she was willing to invest to protect her family’s assets. These are her family’s source of food, milk and income.

At their new settlement in Qoto Rooble Kebele, the host community took her children in but Sa’Ada and her husband are living in the open sleeping outside without shade and covers. The weather here is different from that of Gunagado. Here is a windy, cold and common for biting flea. “Not only is it windy and cold here, but the settlement is also flea-infested and we don’t have limited access to clean water. As a result, we have skin rashes and scabies,” Sa’Ada says.
The host community is providing food to Sa’Ada and her family, but Sa’ada often worries about the neighbours that remained behind in Gunagado as they have been severely affected by drought and may soon run out of food.

A health and nutrition team from Kebribayeh Woreda periodically visits the internally displaced people’s settlement in Qoto Rooble to provide essential primary health services. Kebribayeh General Hospital, the World Health Organization (WHO) and other partners support the health and nutrition team through trainings, the provision of medicines and medical supplies, and operational support.

Ethiopia has been experiencing one of the most severe La Niña-induced droughts in the last decade following the fifth consecutive failed rainy seasons since late 2020. The drought has affected Somali, Oromia SNNP and Afar regions. The effects of the drought on the affected communities are complex with the loss of livelihoods, shortage of food and negative impacts on health.

WHO Ethiopia has been providing emergency health kits, medicines, medical supplies and equipment to the affected regions to help them prepare for and respond to disease outbreaks and other health needs of people like Sa’ada. The Country Office also conducts water quality assessment to prevent the occurrence and spread of water-borne diseases in the drought-affected areas. 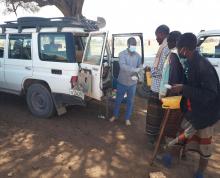