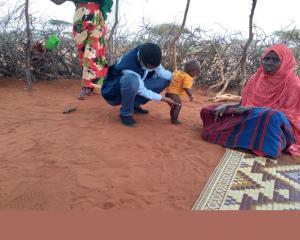 Abdisalan Muktar Ali is a World Health Organization (WHO) disease surveillance officer based in Dollo Zone in Ethiopia’s Somali Region. He is one of nine surveillance officers in the region supporting the regional health bureau in rumor investigation, active case search, and sample processing, validation and classification of suspected acute flaccid paralysis.
In January 2022, he received a report of a case of acute flaccid paralysis (AFP) in a one-year-old boy from a low-income pastoralist family in Dollo Zone, Somali Region.  The little boy, Mohammed Abdulaziz Aden, developed sudden onset of weakness on his left arm and leg, which progressively worsened. When attempts to cure him with holy water didn’t produce results, Mohammed’s mother decided to bring him to a health facility and made the long 15 km trek to Qorof Kebele in Galadi Woreda (district) where she stayed at a relative’s house planning to go to the health centre the next day. Before she could go to the health centre, a health extension worker, Farhiya Ukash, heard about their situation and visited the family. Observing signs of acute flaccid paralysis (AFP), Farhiya immediately reported the case to Galadi Health Office.

Initial investigation
Upon learning of the AFP case, WHO surveillance officer Abdisalan Muktar Ali promptly traveled to Galadi woreda to support verification, investigation and sample transportation for laboratory confirmation.
Abdisalan went to Qorof Kebele in Galadi Woreda for investigation and verification of the suspected AFP case. Upon checking with the health extension worker that attended to the family, he was informed that the family had moved to an area about 90 km away from Qorof.  Undeterred by this development, Abdisalan sought the help of the kebele leader for the best way to reach the family. He was advised to talk to a group of pastoralists that come to the kebele every day at noon to sell milk. He quickly followed this lead, and eventually found someone that gave him a more specific description of the family’s current location together with an important lead – the nickname of the child’s grandfather.  He also learned that the family has moved to Jiracle Kebele in another district for pasture.

Equipped with this information, he traveled to Jiracle Kebele the following day to look for the family. After asking around at the health post and among the communities, he was able to identify the grandmother, who confirmed that Mohammed was sick and accompanied Abdisalan to visit the family at their new settlement, 28 km away from Jiracle Kebele. They hitched a ride for the first 24 km and walked the remaining 4 km to reach the settlement.

Upon investigation, Mohammed’s condition fully fulfilled the case definition of suspected AFP, so Abdisalan collected stool samples and dispatched them to the National Polio Laboratory at the Ethiopian Public Health Institute in Addis Ababa for confirmation.

During the visit to the family, Abdisalan counseled the mother to take her children to the nearest health post for routine immunization against vaccine-preventable diseases and encouraged her to be ready for the upcoming oral polio vaccination (nOPV) campaign planned for February 2022.
“Disease surveillance is not a responsibility to be taken lightly. As I do my job, it is with the full understanding that the wellbeing of my community rests squarely on my shoulders,” Abdisalan says. “I am aware that the alertness, accuracy and diligence with which I conduct disease surveillance can have an impact in the prevention and mitigation of a possible outbreak.”

In early March 2022, Abdisalan returned to the family to follow up on the child’s condition and to inform them of the negative laboratory result. He was in good spirits as he trekked the long way to the family’s settlement because he knew he carried good news – little Mohammed was polio free! The only thing that remained was validation of his physical condition. Indeed, he found Mohammed playing and fully mobile, and following physical examination, validated that he had fully recovered.
“Happy endings like this are the spices of our work, which often involves confirming the presence of disease in households and communities. I am happy to play this critical role in protecting my people from a potential disease outbreak like polio,” Abdisalan says, with a smile.

WHO provides technical, logistical and financial support to Somali Region to accelerate the march towards a polio free world. The support ranges from establishing and implementing a sensitive disease surveillance to detect and notify cases to sample collection, transportation and testing at WHO accredited National Polio Laboratory in Addis Ababa for confirmation, as well as in the successful implementation of oral polio vaccination (OPV) campaigns. 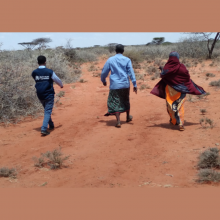