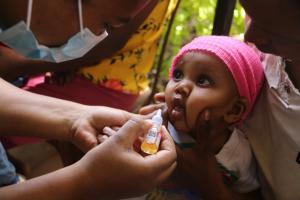 17 April 2022, Addis Ababa –On 15 April 2022, Ethiopia kicked off the second-round polio campaign with type 2 novel oral polio vaccine (nOPV2) aiming to protect over 16 million under-five children from disability and death due to the ongoing polio outbreak in the country. The campaign is taking place on 15-18 April in all regions except Addis Ababa, Afar and Tigray, where it will be conducted at different later dates.

The nOPV2 vaccine is a new tool approved through an Emergency Use Listing (EUL) procedure replacing the monovalent type 2 oral poliovirus (mOPV2) vaccine based on its superiority on proven protection against type 2 circulating vaccine-derived poliovirus (cVDPV2).

“This new vaccine has been introduced in the African Region to ensure, with other polio vaccines, that all forms of polio are eradicated so that children living in areas with low immunization coverage will be adequately protected against polio infection and subsequent paralysis,” said Dr Boureima Hama Sambo, World Health Organization (WHO) Representative in Ethiopia.

The campaign is led and coordinated by the Ethiopian Public Health Institute (EPHI) and the emergency operation centers (EOCs) at all levels with support from partners. More than 100 technical WHO staff and consultants have been deployed to support the campaign through:
•    coordination,
•    training of campaign teams,
•    designing of and hands-on training for all campaign actors on the mobile-based preparedness and implementation monitoring tools such as google sheet and open data kit (ODK), and
•    facilitation of the recruitment and deployment of independent monitors and surveyors for ensuring campaign quality.

WHO staff and consultants are also directly supervising and monitoring the campaign implementation in the communities. WHO has also deployed vehicles to facilitate transport of vaccines to vaccination sites.

Immunization partners, including WHO, UNICEF, the U.S. Centers for Disease Control and Prevention, the Bill and Melinda Gates Foundation, and implementing partners of USAID are on the ground to support this campaign.