A measles vaccination campaign was conducted in Ethiopia from February to March 2022 in SNNP, Somali and Oromia regions targeting more than half a million children aged between 6 months to 10 years. The campaign aimed to stop the spread of a measles outbreak reported from 12 woredas (districts) in three regions: seven woredas of SNNP, one woreda of Guji Zone in Oromia, and four woredas of Somali putting more than 650,000 children at risk.

Following the risk assessment and the detailed investigation report, the national Public Health Emergency Operations Centre (EOC) together with the Expanded Program on Immunization (EPI) Technical Working Group recommended conducting a non-selective vaccination campaign. As per the recommendation, 21 woredas and one refugee camp in the three affected regions were targeted for the campaign.

According to preliminary campaign reports, Somali Region achieved 104% coverage while SNNP and Oromia regions achieved 95% coverage. The campaign helped avert a high risk of morbidity and death in the targeted woredas since the risk of ongoing outbreak was high as the woredas shared borders and have also been affected by drought.

The campaign was coordinated by the Ethiopian Public Health Institute (EPHI), regional public health emergency management (PHEM) teams, and zonal and woreda health offices in collaboration with partners such as WHO and UNICEF.

WHO provided technical, financial and operational support to the investigation of the outbreak, response plan and vaccination campaign. Technical support to the campaign included district-level training of vaccinators and team supervisors.  WHO experts were deployed to monitor and coordinate the campaign, including ensuring optimized cold-chain system and logistics are in place. They also guided vaccinators to ensure COVID-19 prevention measures were observed during the campaign. 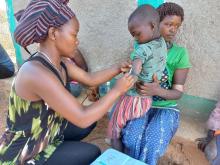