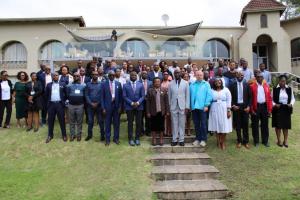 Eswatini has joined countries like Botswana, Mozambique, and Malawi in intensifying efforts to protect more people from polio. Following the finalisation of the National Polio Preparedness and Response Plan, the country went on to conduct a Polio Outbreak Simulation Exercise (POSE). This was through a two-day Tabletop Exercise (TTX) conducted from 29 to 30 November 2022 after several weeks of intense planning.

The purpose of the POSE was to test Eswatini’s operational readiness to respond to a polio outbreak. The activity also acted as a refresher on what to expect in the event of a polio outbreak, and what must be done to enable a coordinated and efficient response by the country team. A team of experts from WHO/AFRO consisting of Dr Diakite Epse Manouan  Dr Samuel Bawa, Dr Landoh Essoya, Dr Emmanuel Kayiira and Dr John Ogange facilitated the activity which was well attended by national stakeholders in line with the one health, the whole of government and society approach.

The POSE was commissioned by the honourable Minister of Health, Senator Lizzie Nkosi who emphasised the need to strengthen Emergency Preparedness and Response (EPR) as revealed during the COVID-19 response.   “The need for resilient health systems with the capacity to prevent, detect, respond to health threats and maintain continuity of essential health services can never be over-emphasised,” she said.

The Acting WHO Representative in the Kingdom, Dr Geoffrey Bisoborwa sent gratitude on behalf of the organisation to His Excellency Prime Minister Mr Cleopas Dlamini and the entire Government for the particular interest given to the Polio Eradication Initiative. This includes having robust Polio outbreak preparedness and response plan and organizing a Polio Outbreak Simulation exercise. “We have all it takes to keep polio off our Kingdom, and in an unfortunate event of happening, to detect and contain it swiftly,” Dr Bisoborwa said.

The country scored 56.7% as an overall performance. Some of the gaps noted included procedures for submitting outbreak notification to WHO in line with IHR, unclear role definitions in the plans, as well as surveillance SOPs. Nonetheless, there were positives, in that a structure is in place to respond to emergencies under National Disaster Management Agency (NDMA). The team also found that the structure of the Risk Communication and Community Engagement (RCCE) was adequate and strategies to communicate demonstrated.

Since the inception of the Expanded Programme on Immunization (EPI) programme in 1980, the country has maintained an active surveillance system for the detection of poliomyelitis where all suspected cases of Acute Flaccid Paralysis (AFP) are reported and investigated immediately and tested for the poliovirus. As soon as a case of WPV is isolated, an immediate investigation is done commencing within 72 hours to identify the scope of the response activities based on such factors as the known extent of transmission AFP surveillance quality, major transit routes, international borders and origin of the WPV case. However, the country still needs to establish environmental surveillance to ensure that the detection of cases is improved.