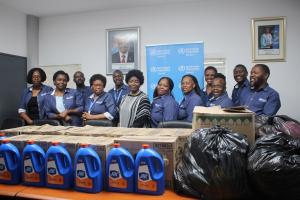 The World Health Organization Eswatini Country Office Staff Association donated items including water purifiers and clothes to the people of Mozambique affected by tropical Cyclone Idai. Tropical Cyclone Idai made landfall during the night of 14 to 15 March 2019 killing more than 1,000 people and leaving 400,000 homeless near the port city of Beira. The resulting floods have since led to outbreak of waterborne diseases like cholera hence the need for water purifiers to ensure access to clean water under the prevailing circumstances.

This donation was made in the spirit of good neighbourly love as Mozambique shares a boarder with Eswatini, hence what affects the people of Mozambique touches the people of Eswatini. Speaking on behalf of the staff association Ms Precious Nxumalo said, “As an office we could not just sit and watch as our neighbours are ravaged by the cyclone. We as an office responsible for health issues, we knew that the best way to prevent Cholera was through access to clean water, hence we are donating these water purifiers. On top of this we are also donating clothes for those displaced individuals”.

The donated items were part of the contributions  from the  UN  Eswatini   that were submitted to the office of the United Nations Resident Coordinator for handing over to the Mozambique High Commissioner.