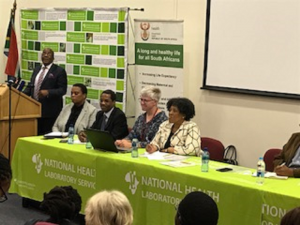 Pretoria/Brazzaville - South Africa’s Ministry of Health declared the end of the world’s largest listeriosis outbreak today (3 September). The World Health Organization (WHO) applauds the country and all those involved in ending the outbreak for their efforts, while calling for continued work on strengthening the country’s food safety system.

“I congratulate South Africa on the end of the listeriosis outbreak, which threatened the food safety of many countries in southern Africa,” said Dr Matshidiso Moeti, WHO Regional Director for Africa. “Together with WHO and partners the country mounted an effective response and we look forward to continuing to work together to strengthen food safety.”

WHO and health partners from the Global Outbreak Alert and Response Network (GOARN) and the International Food Safety Authorities Network (INFOSAN) helped South African health authorities identify the cause of the outbreak as the Listeria monocytogenes strain ST6 (Lm ST6) as well as determine the source of the outbreak as ready-to-eat meat products. This helped activate the country’s Incident Management System, which developed and implemented the national listeriosis response plan, including enhanced surveillance and detection of new cases, the recall and destruction of the implicated ready-to-eat meat products, as well as undertaking assessments of all ready-to-eat meat product manufacturing plants and working with them to put in place systems to ensure safe food production.

WHO, GOARN and INFOSAN also worked with priority countries in the African Region to improve their ability to prepare for, detect and respond to potential outbreaks. WHO also monitored travel and trade measures and worked with neighbouring countries to share export details so that these countries could take appropriate health measures and minimize trade and economic losses for South Africa in relation to the outbreak.

The listeriosis outbreak, which was declared on the 5 December 2017, was the world’s largest documented outbreak of its kind. According to the National Institute for Communicable Diseases (NICD)’s latest report there were a total of 1 060 cases with 216 deaths where the outcome was reported. The last known case of listeriosis was identified in the first week of June 2018. WHO supported South Africa to carry out the epidemiological assessment that led to the determination that the outbreak was over.

“WHO supported the country’s efforts since the time the outbreak was declared in early December,” said Dr Brian Chirombo, Acting WHO Representative to South Africa. “While, the outbreak is over, it is possible that a few more cases of the ST6 strain of listeria will be detected in the coming months as the implicated ready-to-eat products may still be in the homes of some people who are unaware of the recalls.”

Listeria will continue to cause small outbreaks of listeriosis as the bacteria is in nature and can find its way into food production. For this reason, it is essential to have a strong food safety system.

Since the outbreak was declared South Africa has strengthened its health and food safety systems to ensure better prevention, early detection and response to future outbreaks, particularly from ready-to-eat processed meat products. WHO will continue to support the country in its efforts to strengthen its food safety system.