United against rabies in the Kingdom of Eswatini 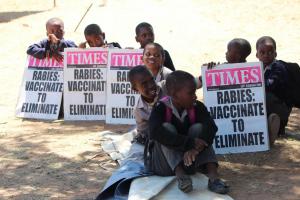 United against rabies in the Kingdom of Eswatini

The World Health Organization (WHO), World Organisation for Animal Health (OIE), the Food and Agriculture Organization of the United Nations (FAO) and Swaziland Animal Welfare Society collaborated with the Government of Eswatini in commemorating the World Rabies Day 2019. The Ministry of Agriculture through the Veterinary Department together with the Ministry of Health, Eswatini Royal Police, other government sectors and the Malindza community in the Lubombo region held a community event to mark the World Rabies Day. The event included a march in the community, speeches and edutainment.

The WHO Country Representative, Dr Cornelia Atsyor together with a representative of OIE for Sothern Africa, the Minister of Agriculture and the Director of Health Services, senior government officers and community members including school children attended the event. The event held under the theme “Rabies: Vaccinate to Eliminate”, aimed at raising awareness about human and animal rabies, prevention, and elimination.

The Kingdom of Eswatini is one of the countries working towards zero human deaths from dog-mediated rabies by 2030. This is the vision of the Global Framework for the Elimination of dog-mediated human rabies. By implementing the framework Eswatini will move a step closer to Sustainable Development Goal (SDG) 3.3, “By 2030, end the epidemics of neglected tropical diseases”, and make progress towards meeting SDG 3.8 on achieving universal health coverage.

Elimination of human deaths from dog mediated rabies is possible by tackling the disease at its source: infected dogs. Making people aware of how to avoid the bites of rabid dogs, to seek treatment when bitten and to vaccinate animals can disrupt the rabies transmission cycle. Thus, nationwide dog vaccination programmes, with sustainable access to human post-exposure prophylaxis (PEP), can save thousands of lives. The Ministry of Agriculture through the Veterinary Department ensures that the national animal rabies vaccination programme is sustained.

Vaccination is the foundation of all rabies control efforts. Today, safe and efficacious animal and human vaccines are among the important tools that exist while community engagement, political commitment and coordination among the main actors are essential to eliminate human deaths from rabies.

The speakers at the event highlighted the importance of prevention of rabies  as the key tool for reduction in death attributable to rabies. The fight against rabies requires a “One Health” intersectoral collaborative approach between the human and animal health and other sectors as well as a whole of community approach. Human deaths due to dog mediated rabies can be eliminated in Eswatini.