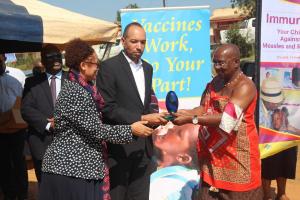 The Kingdom of Eswatini honoured individuals and institutions, referred to as immunisation heroes  who  have immensely contributed towards strengthening the national Expanded Programme on Immunisation (EPI) during the launch of the African Vaccination week in Kwaluseni, a surburb  in Manzini in  Eswatini.

Different platforms including Facebook, the national radio and text messaging were used to select the heroes. A number of community health workers were identified as heroes hence the award was given to the National Rural Health Motivators (Bagcugcuteli), Programme.  Other heroes mainly selected by the Ministry of Health included the former Programme Managers of the Expanded Programme on Immunization, Cold Chain Technicians, Non-Governmental Organisations, the Children’s Protection Unit under the Deputy Prime Minister’s office and the media.

African Vaccination Week is commemorated synchronously with  the World Immunisation Week every last week of April. The AVW aims at promoting the use of vaccines to protect people of all ages against diseases, particularly children. Immunisation in the Kingdom of Eswatini started in the 1970s with few vaccines. Since 1995 the country has introduced more new vaccines to ensure that the children of Eswatini and population at large are not affected or killed by vaccine preventable diseases.

This year’s celebration marks the ninth anniversary of the AVW which aims to take stock of the importance of the vaccination programmes in the African Region in combating life-threatening diseases especially amongst children and also the whole global community. In addition, it emphasises on the role vaccination played in strengthening the health system. The theme for 2019 “Protected together: Vaccines work”calls for greater collective action on immunisation in the WHO African Region as a whole and in Eswatini.

Even though the heroes and many others played a major role in ensuring that children receive quality immunisation services, stagnating vaccination coverage still remains one of the major challenges in the Kingdom.  In 2018, about 6 000 children in Eswatini were not reached with immunisation services.

Speaking during the event, WHO Representative Dr Cornelia Atsyor noted that vaccine-preventable diseases kill more than half a million children under five years of age in Africa every year – representing approximately more than half of the total deaths in the world. She said there is a need therefore to step up all efforts in reaching all children with lifesaving vaccines. “We call on all stakeholders: government, development partners including the United Nation (UN), private organisations, political leaders, civil society organisations, community leaders and parents to increase all efforts to ensure that no child is left behind unimmunised in Eswatini. Together we can achieve this goal,” she said.

Dr Atsyor further commended His Majesty King Mswati III and His Government for the strong commitment to health in general and to immunisation in particular for the continuous financial commitment towards the purchase of all the needed childhood vaccines. She emphasised that this commitment will contribute towards the achievement of Universal Health coverage in Eswatini.

Speaking on behalf of the Minister of Health, Director of Health Services Dr Vusi Magagula said the Kingdom of Eswatini, reported the highest number of unimmunised children in 2017 (12 891) compared to 10 072 reported in 2016. A drop by almost half in 2018 was noted leaving 6 174 unimmunised children who are vulnerable to vaccine preventable diseases.  Dr Magagula attributed this decrease in the number of unimmunized children in 2018 to the AVW, coupled with Child Health Days’ activities, outreach services, routine immunisation and political commitment. He lamented  however, that the remaining 6 174 children without vaccination protection are still a threat to other childrens’ life.

He emphasised that expanding access to immunisation is vital for achieving the Sustainable Development Goals (SDGs), poverty reduction and Universal Health Coverage. Dr Magagula further outlined that the country has a roadmap/implementation framework to guide the operations of quality improvement in health system. These include amongst others supporting fully the procurement of all vaccines to be administered as per national immunisation schedule and ensuring equity in accessing immunisation services in Eswatini.