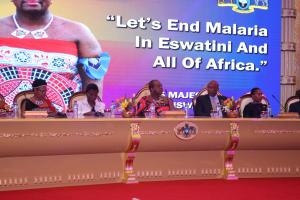 His Majesty King Mswati III, who is the current chairperson for the African Leaders Malaria Alliance (ALMA) launched the End Malaria Fund for the Kingdom of Eswatini. This initiative is aimed at mobilising sustainable domestic resources for malaria elimination in the Kingdom, the region and the entire African continent.

The launch follows a resolution made by Heads of African States at the African Union summit in July 2018. The resolution urges governments to strengthen national ownership of malaria elimination across all sectors and at all levels. The leaders also joined hands in launching the “Zero Malaria Starts with Me” campaign, a continent wide campaign for a malaria free Africa.

The launch was held at the Mandvulo Grand Hall at Lozitha Palace in Manzini on 31 May 2019.  His Majesty King Lestie III of the Kingdom of Lesotho, Former President of United Republic of Tanzania His Excellency Jakaya Kikwete, Emakhosikati to His Majesty King Mswati III, Representatives of Heads of States from the African region, and the Prime Minister of the Kingdom of Eswatini His Excellency Ambrose Mandvulo Dlamini attended the event. The United States Ambassador Ms Lisa Peterson,  representatives from the African Union Commission, the Global Fund, the United Nations Eswatini, and civic organisations were also present. Dr Elizabeth Juma and the Eswatini Country Representative Dr Cornelia Atsyor represented the World Health Organization Regional Director, Dr Matshidiso Moeti.

In his remarks, His Majesty King Mswati III urged the government, private sector, development partners, communities and individuals to unite and declare zero tolerance to Malaria. He announced that the fund is established to mobilise resources necessary to close the funding gap in order to achieve the Kingdom’s goal of eliminating Malaria by 2020. A Board of Directors led by Manzini South Member of Parliament Ms Thandi Nxumalo will manage the fund.
Before concluding his remarks, His Majesty King Mswati III congratulated Algeria for having achieved Malaria free status “We join Algeria in celebrating this important achievement, and it gives us encouragement that we can indeed eliminate Malaria from the African continent,” he said.

Speaking at the same event, His Excellency Kikwete congratulated His Majesty for launching such a fund, saying this was a clear indication that King Mswati III is indeed leading by example. Kikwete said eliminating malaria in the Kingdom, as well as the entire African continent is possible, adding that other countries such as Algeria, Mauritius and Morocco have done it.

King Letsie III of Lesotho, who is also Head of Africa’s Nutrition Champion applauded his Majesty and said the Kingdom of Lesotho, and the African continent at large is ready to support His Majesty in ending malaria in the continent. The Basotho King said he was inspired by the Ingwenyama and was going to emulate such a fund for malnutrition and stunting in Lesotho.

The Kingdom of Eswatini has managed to reduce malaria incidence by more than 92% from 2002 to 2016. Eswatini is one of the few African countries to have met the target set in the Millennium Development Goals (MDGs) long before the target date. The country is ranked among 21 countries globally with the potential to eliminate malaria by 2020.

Through the implementation of the National Malaria Elimination Strategy (2016-2020), Eswatini has made significant strides towards eliminating malaria. The government of Eswatini puts about 70% of the resources for the implementation of Malaria elimination interventions. The government provides all malaria diagnosis and treatment services to everyone free of charge in all health facilities including the private sector. The Government also ensures that anti-malaria drugs are always available in all health facilities. All households in malaria at risk areas are sprayed once a year with residual insecticides and a high spray coverage of up to 90% is maintained. The country also has a surveillance system that helps to map out specifically all confirmed malaria cases and all interventions delivered in each household. This has helped the country to understand in real time what is happening and where.

The Kingdom has further invested a lot of resources in the area of research to ensure that the strategic direction of the programme is always informed by scientific evidence. Government also continues to conduct research on the drugs and insecticides to ensure that they are still effective against the mosquito and parasites

The Kingdom of Eswatini is also part of the Malaria Elimination 8 countries, and has established and strengthened collaboration with neighbouring countries - Mozambique, South Africa and Swaziland (MOSASWA) to address the issue of cross border transmission.  Further, Eswatini is one of seven countries implementing the AFRO II Integrated Vector Management (IVM). The project provides for an opportunity to conduct effectiveness and feasibility studies of other vector control interventions that can contribute to the effort of malaria elimination and help to maintain this malaria-free status in the post elimination period under the local circumstances.

It is possible to eliminate malaria in the Kingdom by 2020.