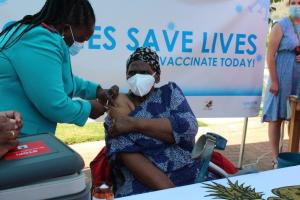 The Kingdom of Eswatini has joined many countries around the world in rolling out a nationwide COVID-19 vaccination campaign.

The Acting Prime Minister of the Kingdom, Themba Nhlanganiso Masuku launched the nationwide campaign in the presence of the United Nations Resident Coordinator, European Union Ambassador, United States of America Ambassador, representative of other development partners, cabinet ministers and government senior officials. The acting Prime Minister received his first dose of the AstraZeneca vaccines together with more than 59 officials present during the launch.

The Kingdom has received 32 000 doses of the Oxford AstraZeneca vaccine, 12 000 of which were received through the COVAX facility and the rest from a generous donation from India. These vaccines will help to save lives as the country anticipates a third wave of transmission.

In order to ensure equitable deployment of the vaccine, the country has come up with a phased approach starting with all health workers , followed by the elderly and those with comorbidities, then all those at high risk of exposure to COVID 19 virus and lastly  all other individuals above 18 years of age.

The Acting Prime Minister emphasised that the launch of the national vaccination campaign was a significant milestone in the fight against COVID-19. He also highlighted that it was a display of  the immovable commitment by His Majesty’s government to protecting Emaswati as health experts have countless times before stated that the vaccines are safe and save lives. He noted that the vaccines will not only prevent people from falling seriously ill and lower deaths but will also help relieve the emotional toll that has gripped the nation for over a year now. He said successful implementation of the program, which relies on the cooperation of all Emaswati, will also allow people to return to life as they know it.

“It is an honour for me to launch the national COVID19 vaccination campaign in the Kingdom. This, in my books, is one of the most significant health programmes we have to implement diligently and expeditiously to save lives,” the Acting Prime Minister said in his opening remarks.

“Prevention remains a critical component of the national response to the pandemic. It is important, therefore, to remind the nation that the rollout of vaccines does not yet give us the license to abandon the health protocols that we have been so religiously adhering to over these past twelve months. Even as we begin this promising new phase of vaccination, it remains our utmost duty as Emaswati to keep on practicing all the laid down health protocols to avoid watering down any of the gains we have already made. Government will continue to capacitate the health sector to ensure that testing, contact tracing, isolation, quarantine and quality care continue parallel to this vaccination programme,” he said.

He assured Emaswati that the vaccines that Government is providing are safe and further stated that government would continue to work with manufactures and partners to ensure the speedy delivery of other vaccine orders that are already in the pipeline. He emphasised that to win the battle, we need to keep fighting, integrating new technologies and strategies that have been proven to halt the spread and severity of the disease.

The Kingdom of Eswatini recorded the first case of COVID 19 in March 2020 marking the first wave which peaked in July 2020. This was followed by another surge in cases in December 2020 to January 2021. The country experienced a marked increase in cases and deaths with the health system being overwhelmed.

After declaring a national state of emergency during the initial stages of the pandemic, the country established the COVID19 Task Team to coordinate response strategies. A series of interventions were activated both at sectoral and multi-sectoral levels across all four regions of the country. For over a year, the Kingdom of Eswatini and the rest of the world have been adopting different strategies to control the virus whose behavior is extremely unpredictable.

COVID-19 vaccines will save thousands of lives in the country and help the economy and livelihoods to recover faster. But it is however important to note that the beginning of vaccination efforts does not mean easing up on the public health measures that have kept many safe in the past year. The light is visible at the end of the tunnel, but we still have a long way to go.