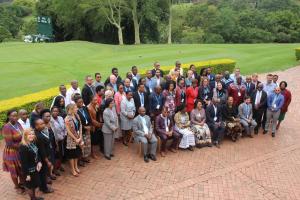 The Minister of Health, Honourable Lizzie Nkosi opened the second consultative workshop for improving access to affordable vaccines for Middle Income Countries (MICs) in Africa, at the Royal Swazi Convention Centre in Ezulwini on 30 October 2019. This meeting, organised by the World Health Organization (WHO) Regional Office for Africa is attended by stakeholders involved in the procurement and use of vaccines from seven Middle Income  Countries in  African.

The workshop is part of the WHO Regional Office’s efforts to increase the capacity of middle income countries in the African Region to make informed decisions on immunization product choices such as the vaccines, ensuring access to lifesaving vaccine as well as on leveraging political commitment and funding for immunization.

Participants of the workshop are pondering on best practices from member states procurement initiatives and also build consensus and progress towards the operationalisation of the optimal vaccine procurement programmes for middle income countries.

At the 28th African Union (AU) Summit on 31 January 2017, Heads of State from across Africa endorsed the Addis Declaration on Immunization (ADI), where they committed to advancing universal access to immunisation across the region. The ADI roadmap includes ten commitments to achieve universal and equitable access to immunisation on the African continent. It also builds on and complements existing efforts aimed at improving immunization in Africa and around the world, particularly the Global Vaccine Action Plan (GVAP). The workshop somehow addresses one of the ADI roadmap strategies whereby member states are expected to generate and sustain political commitment and funding for immunisation.

In her opening remarks, Minister of Health Lizzie Nkosi noted that middle income countries face unique challenges when it comes to procurement of commodities including vaccines. These challenges, she says, range from quantification, tendering process, vendor selection and the price of vaccines which are contributory factors to the downward trend in coverage. The Minister noted that beyond the issues of high vaccine costs, there are also issues with lack of technical capacity on forecasting and planning, unreliability of local vaccine suppliers, as well as absence of vaccine manufacturing entities.

The Minister acknowledged UNICEF for providing an option for affordable vaccine procurement,  but the strict requirement of upfront payment makes it difficult for countries. She said government is trying by all means to ensure that funds for vaccine procurement are paid upfront at least on quarterly basis to ensure effectiveness in accessibility and availability of vaccine throughout the year.
“As a country, we need vaccine to protect against cervical cancer, the most common cancer among women in the developing world including Eswatini. We have new vaccines to prevent pneumonia and diarrhoeal diseases, the two biggest killers of young children worldwide and the cost of introducing and sustaining a high coverage of these vaccines is very high for MICs. I am happy that the meeting will be focusing on finding solutions to such situations”, said the Minister.

Speaking at the same event, the WHO Representative in Eswatini Dr Cornelia Atsyor emphasised that immunisation is a key pillar towards the achievement of Sustainable Development Goals (SDGs) including the attainment of Universal Health Coverage (UHC), reduction of the burden of vaccine preventable diseases, leading to improved health and subsequent economic prosperity. She said stakeholders including governments, vaccine manufacturers, suppliers, research institutions, private institutions, funding entities must work together to build synergies that ensure universal access to affordable vaccines for all countries including middle income countries.

“I cannot over-emphasis the incredible results that our collective efforts could bring,” said Dr Atsyor, adding that the WHO Regional Office for African and partners are committed to increasing access not only to new vaccines and technologies but also in building capacities of countries in sustaining the right investments towards the most cost effective public health interventions.